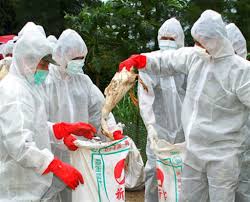 Share
Facebook Twitter LinkedIn Pinterest Email
No fewer than 160 poultry farms were quarantined and 400,000 birds culled, since the outbreak of avian influenza (bird flu) in Plateau four months ago.
Mr John Dasar, the Chairman, Poultry Farmers Association of Nigeria (PAN) in the state, announced this at a sensitisation workshop on bio-security on Thursday in Jos.
The workshop, aimed at behavioural change on bio-security, was organised for poultry farmers by the Federal Ministry of
Agriculture and Rural Development in collaboration with the Nigerian Institute of Animal Science (NIAS)
Dasar said that with the prevalence of the disease in Plateau, no amount of awareness on its preventive measures would be enough.
“This workshop is timely, because poultry farmers in Plateau have suffered a lot of setback lately.
“Between January and now, more than 160 farms were affected by this dreaded disease and were quarantined, with 153 of them completely shot down.
“Similarly, no fewer than 400,000 birds were culled. Poultry business has sustained many families in Plateau.
“Now, if this ugly situation continues, do we think life will be as usual?’’ Dabar asked.
The chairman, however, accused some farmers of carelessness in handling the situation, thus resulting in further spread of bird flu in the state.
“The attitude of some farmers was not good, as many of them took measures that were not friendly, and so helping to spread the disease to farms of even close friends,’’ he said.
Dasar appealed to the state government to look into the plights of poultry farmers by helping to proffer workable solution to the menace.
He also advised the government not to allow the poultry industry to collapse, saying “this may spell doom for the nation’s Growth Domestic products (GDP).”
Declaring the workshop open, Dr Ademola Raji, the Director Department of Animal Production and Husbandry Services, Federal Ministry of Agriculture, said the workshop was timely in view of the global attention being turned towards poultry industry.
Represented by Mrs Winnie Lai-Solarin, an Assistant Director in the ministry, the director added that its primary concern was to ensure bird flu does not devastate the poultry industry like it did in 2006 and 2008.
“This training is of huge importance to the life of poultry industry and that of the general livestock sub-sector,’’ he said.
The director, therefore, called on participants to be attentive, saying “the training seeks to chase bird flu out of our society’’. NAN