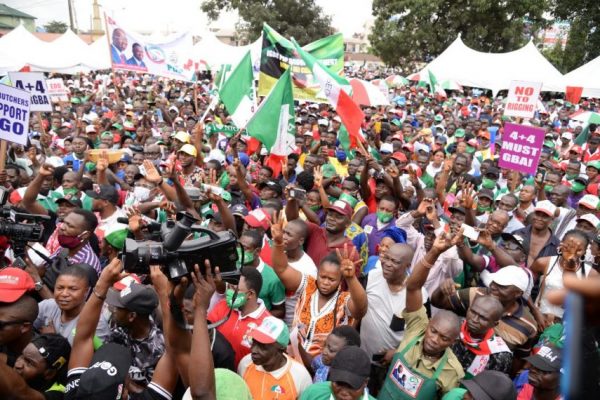 Commercial activities were halted temporarily in the early hours of Saturday in Benin City as supporters of Governor Godwin Obaseki and candidate of the Peoples Democratic Party for the September 19 gubernatorial election, put up a carnival-like march, termed the Umbrella March, to reinforce their support for the governor.

The march, which was organised by the Edo Voters Volunteers Assembly, a grassroots voter mobilisation body, had over 2,000 participants made up of youths and women, mobilised from the 12 wards in Oredo Local Government Area of the state.

Addressing the supporters, Obaseki urged the electorate in the state to report acts of criminality by any person or group of persons to the appropriate authorities to forestall a breakdown of law and order in the run-up to the governorship election.

According to him: “Don’t be afraid to come out and vote.

“We are going to give you a mobile phone number to call and report anybody seen destroying billboards and banners.

“If you see anybody with guns, with intent to destroy electoral materials, call us and don’t be afraid.

“We cannot and will not be afraid of them.

“This election is about moving Edo forward.

“When you vote for me on the 19th of September, you would have removed the stone tied to my leg that has not allowed me to work more than I have done for you.

“When I come back, I will improve the Internally Generated Revenue to enable workers get their salaries and sustain payment of pension too.

“I will continue to provide loans to market women to improve their daily income.

“I don’t know how to thank you all for this overwhelming support you have shown me.”

The Umbrella March, according to the organisers is aimed at ensuring the governor’s re-election through aggressive voter education, community mobilisation and citizen engagement.