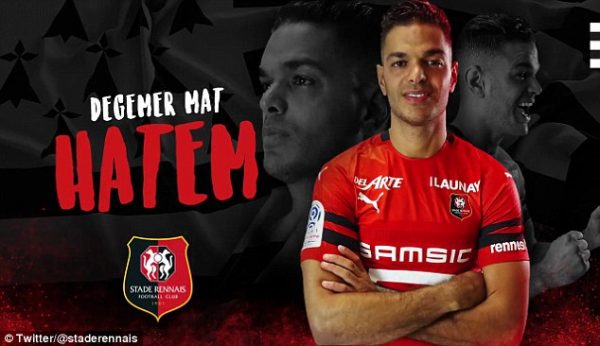 Share
Facebook Twitter LinkedIn Pinterest Email
Rennes have announced the signing of Hatem Ben Arfa with a video hailing the arrival of “an artist” at the French club.
The 31-year-old was a free agent after leaving Paris Saint-Germain in June.
Rennes, 14th in Ligue 1, revealed their latest signing with a video on Twitter starting at the Church of the Jacobins.
The church was built in the year 1230 and is described as “an exceptional testimony to southern gothic design”.
The video blends the art associated with the southern France region alongside highlight clips of Ben Arfa from throughout his career – all to the tune of ABC by the Jackson 5.
Ben Arfa had spent two seasons at PSG but didn’t make an appearance in the 2017-18 season. Before that, played for Nice in 2014-15.
There were reports earlier this week that Ben Arfa may seek damages from PSG after going so long without competitive action.
His lawyer, Christophe Berand, was quoted by RMC Sport as saying: “My client’s value has depreciated after a long period without playing.
“It was discrimination and unjustified isolation.”
Rennes host Bordeaux in Ligue 1 on Sunday before taking on Ben Arfa’s former club Nice on September 15, after the international break.
Rennes are in the Europa League this season, in Group K alongside Astana, Dinamo Kiev and Jablonec.
Hatem Ben Arfa Ligue 1 Rennes
Share. Facebook Twitter Pinterest LinkedIn Tumblr Telegram Email