Bellew: Tyson Fury not ready for me 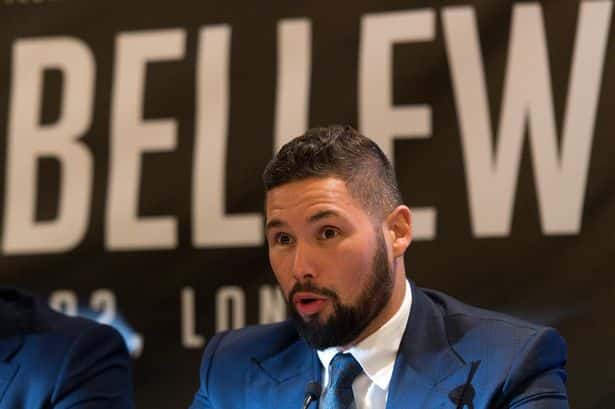 Share
Facebook Twitter LinkedIn Pinterest Email
Tony Bellew says Tyson Fury is “not ready” for him, but has vowed to end the former world heavyweight champion’s comeback if they do fight in the future.
The Merseysider was far from impressed as Fury ended a two-and-a-half year absence with a fourth-round stoppage of the overmatched Sefer Seferi in Manchester last weekend.
After back-to-back wins over David Haye, there are no concerns from Bellew about the prospect of facing Fury, although he firmly believes the 29-year-old needs more time to prepare for a British battle.
“I would love it,” Bellew told Sky Sports. “People tell me that he said I’m too small, yet he gets in with a guy three inches smaller than me, and about a stone lighter.
“I’m not too sure what he actually means when he says too small. Right now, I’ll be honest, Tyson Fury isn’t really ready for me. I would stop Tyson Fury quicker than I stopped David Haye. There’s no two ways about it.
“I think he needs another fight, and I’ll give him another fight, no problem at all. But we need to talk, speak to Eddie Hearn.”
A domestic clash is likely to create huge public demand and ‘The Bomber’ has predicted he would bring a swift end to Fury’s hopes of regaining a world heavyweight title.
“I’m pretty sure we could sell out any stadium,” said Bellew. “I probably think we could do a stadium just for the press conference. If he wants to come as Batman, I’ll come as the Joker. Whichever way you want to play this, I’ll deal with it, I can do it.
“Tyson Fury is not ready for me in any way, shape or form. I don’t care what kind of version you give me. I’ve seen the best of him against Steve Cunningham and he was flat on his back. When I put someone on their back, they don’t get away with it. They stay down.
“I’m very happy that Tyson Fury is back. The heavyweight division is buzzing again, but understand me, I will end it for you, not a problem at all.”
david haye Tony Bellew Tyson Fury
Share. Facebook Twitter Pinterest LinkedIn Tumblr Telegram Email