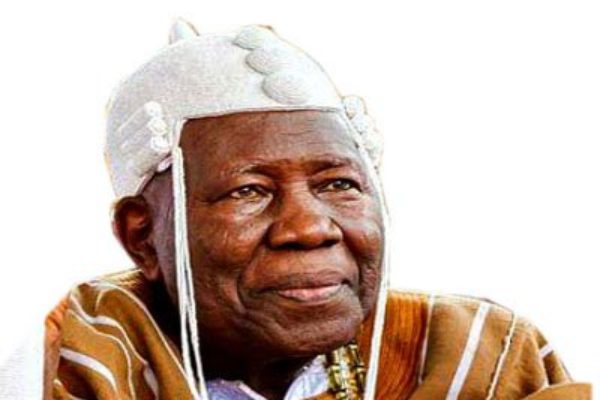 The Olubadan of Ibadanland, Oba Saliu Adetunji, on Wednesday appealed to supporters of Chief Sunday Adeyemo (Sunday Igboho) to be peaceful and law abiding in presenting their grievances.

The traditional ruler made the appeal while receiving some residents, who were protesting against last Thursday’s raiding of Sunday Igboho’s house by the operatives of Department of State Services.

The Olubadan, who initially received the protesters at his Popoyemoja Palace, later instructed  Adeola Oloko, his Personal Assistant/Head of Media, to address them.

Adetunji appealed to them to be peaceful and law abiding in presenting their grievances to the Federal Government.

While urging them to be patient with the government, the traditional ruler called for peace in Ibadanland and the entire state in general.

He assured the protesters that their demands for the release of those arrested in Igboho’s house within seven days, would be presented to the appropriate quarters.

The Olubadan also promised that he would organise a stakeholders’ meeting to see to their demands.

Adetunji, however, debunked the claims in the social media that he had been “settled” by the government, saying there is no iota of truth in the said publication.

Earlier at Olubadan’s Palace, Chief Olusola Ojo, speaking on behalf of the protesters, described the raid on Igboho’s house at Soka area of Ibadan as “illegal and uncalled for”.

Ojo said that Igboho was an activist and should not have been treated as a terrorist.

He, therefore, called on the Federal Government, to release all the aides of Sunday Igboho in DSS detention.

The News Agency of Nigeria reports that some protesters, comprising of youths and elderly people, believed to be friends, relatives and people sympathetic to Igboho’s cause, took to major streets of the state capital.

Dressed in black attires, they started the protest at Soka Junction, few metres away from Sunday Igboho’s house.

They were singing freedom songs, while displaying placards with various inscriptions.

The protesters later moved through the Challenge area to the Palace of Olubadan.

NAN reports that as at 4:40 p.m., armed mobile policemen were stationed at the gate of the Governor’s Office at the State Secretariat to prevent the breakdown of law and order as they envisaged the arrival of the protesters there.

When contacted, the Deputy Police Public Relations Officer in the state, Omotayo Oduniyi, said adequate security measures had been put in place to ensure there was no breakdown of law and order during the protest.

NAN recalls that operatives of the DSS had on Thursday raided Igboho’s house, leading to the death of two persons, arrest of 13 people and recovery of some ammunition.