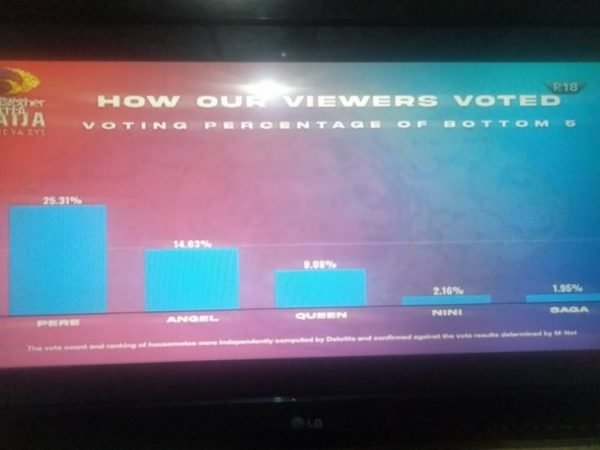 Share
Facebook Twitter LinkedIn Pinterest Email
Nini, Queen and Saga, housemates of the ongoing television reality show, Big Brother Naija Season 6, have been evicted from the show.
This was announced by Ebuka Obi-Uchendu, moderator of the show, during the live eviction show on Sunday.
Saga got the lowest vote percentage from his fans with 1.95 per cent, Nini had 2.16 per cent, Queen got 9.08 per cent, Angel garnered 14.63 per cent, while Pere had 25.31 per cent.
Pere and Angel, who have now been isolated in a “White Room” in the BBNaija house, have been subjected to a game of “trucks and screwdrivers”.
The winner of the game will join the other four finalists: Emmanuel, Liquorose, Cross and Whitemoney.
Saga, after his eviction, disclosed that he would pursue a career in modeling as well as acting and continue in his career as a Visual Artist.
The News Agency of Nigeria reports that the show is now in its final week as the winner would be announced on October 3.
Big Brother Naija Nini queen SAGA Season 6
Share. Facebook Twitter Pinterest LinkedIn Tumblr Email