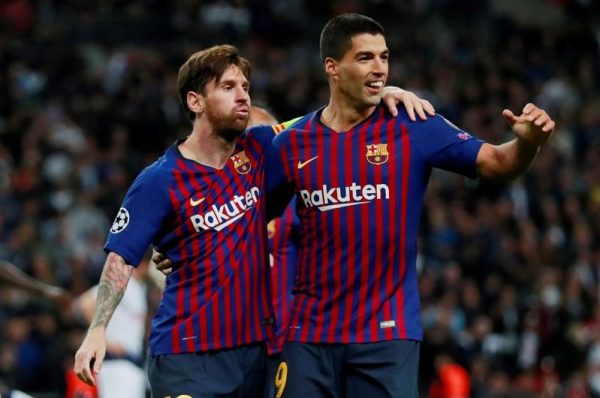 The 117th Copa del Rey final takes place at the Estadio Benito Villamarin in Sevilla tonight as Spanish champions Barcelona face Valencia.
Barca are looking to add to their La Liga triumph by making it a double, while their opponents – who finished 26 points worse off in the league – are aiming to lift their first piece of domestic silverware since going all the way in this competition 11 years ago.
Despite making it back-to-back La Liga titles under Ernesto Valverde, this campaign has been a rather mixed one for Barca following their disappointing exit from the Champions League.
The Catalan giants led Liverpool 3-0 heading into the second leg of their semi-final on May 7, only to lose 4-0 at Anfield as they crashed out 4-3 on aggregate.
It is a result that will go down as one of the worst in Barcelona’s history and it ensures that Valverde will head into the summer with questions being asked of his future at Camp Nou, regardless of this weekend’s result.
Barca retained the league title with a 1-0 win over Levante at the end of last month, but since then they have lost at Celta Vigo and Liverpool, while also being held by Eibar last time out.
Their only win in four matches was at home to Getafe on May 12.
Changes were made for the 2-2 draw at Ipurua last weekend, but there is a fear that Barca’s momentum is drying up at just the wrong time, with their campaign crumbling following the heavy loss on Merseyside.
The Copa del Rey is a competition that Barcelona always tend to perform well in, though, given that they have won it four seasons running since losing 2-1 to Real Madrid in a memorable 2013-14 final in Valencia.
Barca are the most successful side ever in the competition, winning it 30 times in total and reaching the final an incredible 41 times.
As it turns out, the Catalan club’s only other final defeat this decade also came at Valencia’s home when losing 1-0 to Madrid in 2011.
Losing finals is not something that tends to happen when Barcelona are involved and, having won the La Liga title with such ease, they will head into this match as strong favourites to secure the domestic double for a ninth time.
Unlike in 2009 and 2015, though, there will be no Champions League to add to those crowns.
That, ultimately, is what the 2018-19 campaign will be best remembered for.
Valencia also finished fourth in the La Liga standings to ensure that Champions League football will be played at the Mestalla next season, and Marcelino will now be looking to pull off a major upset to add an eighth Copa del Rey to the collection.
Los Che finished their league campaign with three wins in a row, scoring 11 goals during that run as they held off Getafe for the fourth and final Champions League spot.
However, Valencia were dealt a major blow in the Europa League earlier this month as, like Barcelona, they suffered a semi-final defeat on the continent to English opposition.
Arsenal won the first leg 3-1 and followed that up with a 4-2 victory in Spain, which only highlighted Valencia’s defensive frailties in recent weeks.
Three goals were also conceded against Atletico Madrid, a couple against Huesca and another against Alaves.
Despite keeping just two clean sheets in 13 matches at the end of the season, though, only Barcelona can boast a better defensive record in the Spanish top flight.
Valencia only lost seven league games all season and went unbeaten across their two matches with Barcelona, so Valverde’s men will know that nothing can be taken for granted.
On their run to the final, Valencia have seen off Ebro, Sporting Gijon, Getafe and Real Betis, earning a 3-2 aggregate victory over the latter to make it all the way for the first time since 2008 when beating Getafe 3-1 to lift the cup.
That was the most recent of Los Che’s seven Copa triumphs, which places them fifth in terms of the competition’s most successful clubs, behind Atletico Madrid, Real Madrid, Athletic Bilbao and Barcelona.
Victory this evening would top each of those past successes, while also potentially hammering the final nail into Valverde’s coffin.