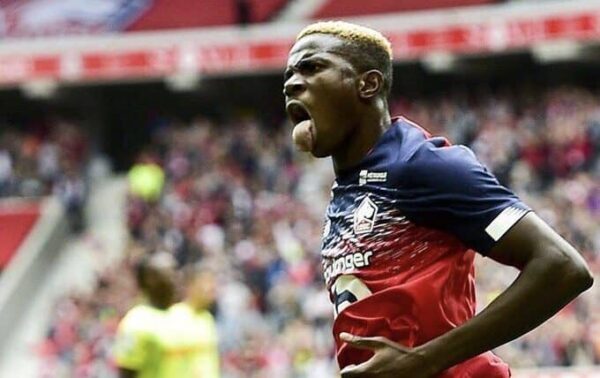 Barcelona and Real Madrid will reportedly do battle to land the signature of Lille forward Victor Osimhen this summer.
The 21-year-old Nigeria international joined the Ligue 1 side last summer for £19 million and has been impressive so far this season.
He has scored 15 goals and assisted a further five in all competitions this season for the French outfit.
And his performances have attracted the attention of some of Europe’s big hitters, Le10Sport claim.
The report suggested both Barca and Madrid contacted Lille during the January transfer window to discuss the possibility of a midseason move.
Both Spanish sides are searching for reinforcements up front and see the youngster as an ideal candidate to fill the void.
Los Blancos forward Karim Benzema and crocked Barcelona striker Luis Suarez are entering the twilight of their careers and will need to be replaced.
It was expected that Barcelona would look to add a number nine in January but no striker came in.
It was reported that Lauturo Martinez is their main target, but there are concerns over the cost of such a move.
Neither Barca nor Real were able to complete a deal for Osimhen but the recent report suggests that they still have unfinished business with him.
Osimhen scored twice in five Champions League group-stage appearances earlier this season, including a goal against Chelsea at the start of October.
Lille will be in a strong position when it comes to any potential negotiations, though, as the former Wolfsburg youngster is signed to the Ligue 1 side until the summer of 2024.
The French team could be able to offer Osimhen the caveat of playing Champions League football once again next season should they qualify.
They are currently in fourth spot in Ligue 1, just six points behind third-placed Rennes.
Barcelona and Real Madrid, meanwhile, are still separated by three points at the top of La Liga after both won their respective games at the weekend.