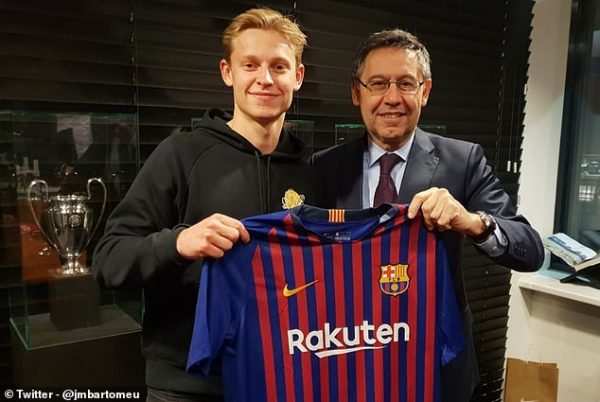 Share
Facebook Twitter LinkedIn Pinterest Email
Barcelona have confirmed the signing of Ajax and Holland midfielder Frenkie de Jong.
The 21-year-old has put pen to paper on a five-year deal at the Nou Camp after interest from a host of top European clubs, including Manchester City and PSG.
He will see out the season in Amsterdam before joining up with his new team-mates in the summer.
His arrival was announced on the club’s Twitter page, via a video of tweets telling the Catalan giants to ‘announce de Jong’.
President Josep Maria Bartomeu tweeted: “With the arrival of Frenkie De Jong we add talent, youth and Barca style to our sporting project.
“We are convinced that he will be a key part of our team for years to come. Welcome, Frenkie!”
According to Radio Catalunya, the Spanish champions sent a contingent of executives to Amsterdam on Wednesday to complete the transfer.
He is the third signing made by Barcelona this month after the arrivals of Kevin-Prince Boateng and Jeison Murillo.
Boateng has moved from Serie A side Sassuolo on a six-month loan deal while Murillo arrived on loan from Valencia.
De Jong has made 28 appearances this season, building on the 26 games he played in the last campaign.
He made his senior debut for the Dutch national side in June last year, in a friendly win over Peru.
He has since gone on to win five caps and is sure to represent Holland at the Nations League finals in June later this year.
Post Views: 0
Ajax FC Barcelona Frenkie De Jong Holland Manchester City Nou Camp PSG
Share. Facebook Twitter Pinterest LinkedIn Tumblr Email