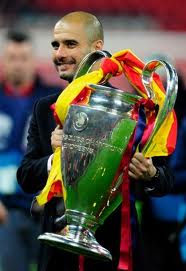 The Coach of FC Barcelona, Pep Guardiola, is set to quit the club at the end of this season.

Guardiola said on Friday that he has decided not to extend his contract with one of the world’s most successful teams.
“Pep Guardiola will not continue as coach next season,” Barca President, Sandro Rosell, told a news conference, adding: “Thank you for your work and your love.”
Guardiola, who wants to recharge his batteries, said: “I’m sorry for the confusion in recent weeks.
“I’ve always wanted short contracts because the demands at Barcelona are so big.
“Now we were out of the two main competitions, it was a good time to announce it.
“The reason is simple: Four years, that gets everyone tired.
“The new coach will give things that I can’t give anymore.:
FC Barca were knocked out of the Champions League as holders by Chelsea in the semi-finals on Tuesday while Real Madrid are likely to steal their La Liga title in the coming weeks.