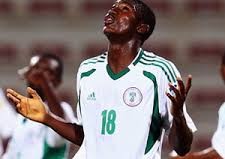 Striker Taiwo Awoniyi has identified teammate and captain, Musa Muhammed, as one of the factors behind Golden Eaglets’ sterling performances.
Muhammed has been an inspired choice by Coach Manu Garba “because he combines the names of two prophets” and Awoniyi said there couldn’t have been a better captain than the Kano State-born defender.
“Without any doubt, Musa Muhammed is my best player not because on and off the field, he is a leader,” Awoniyi said of Muhammed, who has scored twice at the FIFA Under-17 World Cup UAE 2013.
In a survey conducted amongst the players, Awoniyi noted that Muhammed has perfectly played his role as captain well because of an innate humility, which is second to none.
Cool, calm and collected, Muhammed has played more matches than any player in the Golden Eaglets and Awoniyi stated that Muhammed has impressed everyone because he makes no bone about it.
“Muhammed is a born leader,” Awoniyi said matter-of-factly. “You can hardly know that he is our captain because he doesn’t show it at all.
“On and off the pitch, Musa is a leader because he regards us as friends and teammates.”
Awoniyi’s view is equally shared by first choice goalkeeper, Sunday Alampasu, who maintained that Muhammed’s exemplary conduct was worth emulating.
Alampasu said: “I will pick skipper as our best player not only in this tournament but overall because he welcomes all of us with open arms when we came into camp,” said Alampasu. “Musa is a very good guy indeed and I wish every one of us can be like him.”
Meanwhile, on the margin of the official photo shoot for the two skippers contending for the FIFA Under-17 World Cup final on Friday, Muhammed has predicted victory for the Golden yet again.
“It is great to be involved with this, “said Muhammed, after a feel of the trophy at the bank of the Abu Dhabi Intercontinental Marina. “There is no way we would allow this trophy to be taken by Mexico on Friday and Insha Allah (by the grace of Allah), we are going to win this trophy.”