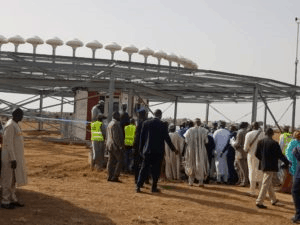 The Minister of State for Aviation, Senator Hadi Sirika, on Tuesday, said that the Federal Government has completed 134 of 157 projects initiated and executed in aviation industry between 2015 and 2019.
Sirika disclosed this while inaugurating some projects executed by the Federal Airports Authority of Nigeria, Nigerian Meteorological Agency, Accident Investigation Bureau and Nigerian Airspace Management Agency in kano.
He explained that some of the projects were inherited by President Muhammadu Buhari’s administration while majority were initiated and completed within four years by this administration.
Out of these 157 projects, 134 had been completed 100 per cent, while some of them were inherited projects that we finished.
He said: “Most of them were new projects that we started and completed by the grace of God 100 per cent; few of them are in excess of 50 per cent completion.
“We are in Kano today because in Kano we have done a lot. Few of them for example under NiMet, we have commissioned the regional office, which will serve the seven North Western states.
“Under AIB, we have also the office, which will also serve this zone and I think AIB has four offices in Lagos, Enugu, Abuja and Kano and we have inaugurated that of Kano.
“Also, on the part of the NAMA, we have inaugurated the DVOR, which is the Doppler Very High Frequency Omnidirectional Radio Range equipment, the Instrument Landing System equipment and the radios for communication.”
He explained that most of these things they do in aviation are not things that the passenger or traveling public can notice and see.
According to him, they are remote and away from sight but they make aviation very safe and secure and also in addition very precise.
The minister explained that the NAMA equipment were safety equipment that are critical to air transportation, adding that aviation was beyond terminal building.
He also disclosed that the new international terminal under construction at the airport would be completed, saying the project has reached 90 per cent completion.
The News Agency of Nigeria reports that the minister inaugurated the new General Aviation Terminal at Malam Aminu Kano International Airport executed by FAAN.
He also inaugurated the new Regional offices of AIB and NiMet for the Northwest as well as the Instrument Landing System and communication equipment executed by NAMA at the airport.