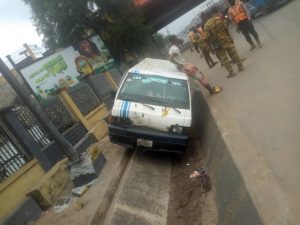 Two male adults on Thursday lost  their lives in a road accident involving three vehicles at the flyover in Upper Iweka, Onitsha in Anambra.

Utten Boyi, the Commander, Federal Road Safety Corps (FRSC) in Anambra, confirmed the incident to the News Agency of Nigeria in Awka.

Boyi said the accident, which occurred at noon, was caused by speeding and loss of control.

“A witness report reaching us indicates that driver of the trailer, who was speeding, lost control of the vehicle and rammed into two other vehicles.

“A total of eight persons were involved in the crash, comprising five male adults, one female adult and two male children.

“One male adult of the eight persons, sustained some degrees of injuries, and was taken to Toronto Hospital by FRSC rescue team from Upper Iweka Command.

“Two male adults, who were passengers in one of the vehicles, were, however, confirmed dead by the doctor on duty.

“Their bodies had been deposited at the mortuary,” he said.

While condoling with families of the dead, Boyi warned motorists against speed limit violation.

He urged them to drive safely to avoid accidents and loss of lives.