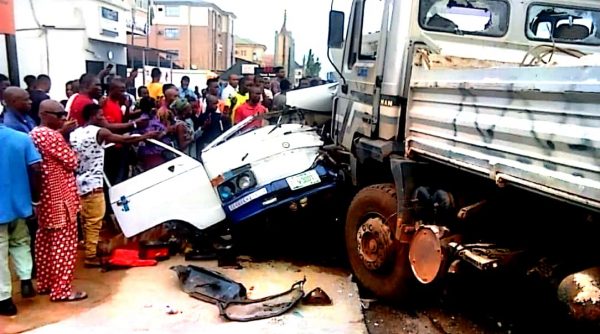 An early morning head on collision involving a tipper loaded with sand and a commercial bus claimed the lives of four persons on Tuesday in Benin, Edo State.

The accident occurred at Ogbelaka Junction on Sakponba Road in Oredo Local Government Area of the state.

The spokesman of the State Police Command, SP Bello Kontongs, who confirmed the incident, said four persons died as opposed to the nine reported by those at the scene of the mishap.

Bello said three people lost their lives on the spot, while one died on the way to the hospital.

According to him, those injured in the accident were rushed to hospital for treatment.

The accident caused traffic gridlock as the exit routes to Asoro, Eri and Ogbelaka Streets were completely blocked, leaving commuters to trek long distances to their destinations.