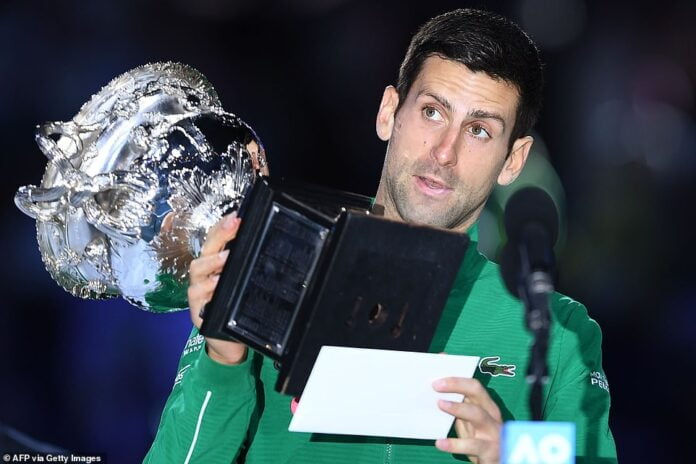 Novak Djokovic rode out a crisis to win his eighth Australian Open title after being given an almighty scare by Dominic Thiem.
Struggling to keep his emotions in check and with undulating moods and energy levels, the 32-year-old Serb used all his experience to deny the Austrian a first Major title and move his own overall tally up to 17.
He becomes only the second man in history after Ken Rosewall to win a Grand Slam trophy across three decades after edging through 6-4, 4-6, 2-6, 6-3, 6-4 in just shy of four hours.
His celebrations were relatively muted at the end even though he had been given a harder test than expected.
Thiem kept fighting to the end and won himself many friends with this performance, certainly more than Djokovic, but perhaps the closest the Austrian got was a break point at 1-1 in the fourth set.
He was vainly playing catch up in the fifth.
He has established himself as a real danger to the three players who have dominated the men’s game but it still waits for its first new singles champion since 2014.
Djokovic made an electrifying start that saw him race to a 4-1 lead, although an indicator that this was not going to be easy came when the Austrian pulled him back for 4-4.
However, Thiem was to surrender the opener in limp fashion through a double fault.
Thiem was to receive similar gifts in the second set as his opponent’s second serve deteriorated.
Djokovic was also bothered by the usual situation of the crowd being largely against him, and his grievances were added to when in the ninth game he was given two time violations by Frenchman Damien Dumusois.
Angered, he tapped – highly illegally – the umpire three times on his foot as he walked past the chair and then told him sarcastically: “Well done you’ve made yourself famous, mission accomplished.”
The normal Djokovic strut was gone, unsettled by Thiem staying close to the baseline and hitting with intense power.
For the first time in the tournament he started to look fatigued, being properly physically tested.
Six straight games were conceded after he was given the time violation, and when he broke that streak at 0-4 in the third he called on a medic, complaining of lacking energy.
His second serve speed had dropped by an average 12mph during the set.
Thiem had to battle to hold for the set before Djokovic flailed a forehand into the net.
He then disappeared off court with the doctor, which gave his opponent five minutes stewing time.
The Serb, who had also been seen taking a pill during his semi-final versus Roger Federer, played with renewed purpose thereafter, his body language noticeably perking up.
The groundstrokes of Thiem, who had played two gruelling rounds before this, slightly lost their penetration and the pressure told at 3-4 when he played a poor game and was broken to the delight of the large Serbian contingent in the stands.
The combination of the Austrian slightly backing off and Djokovic rediscovering some extra pop on his serve was a crucial one.