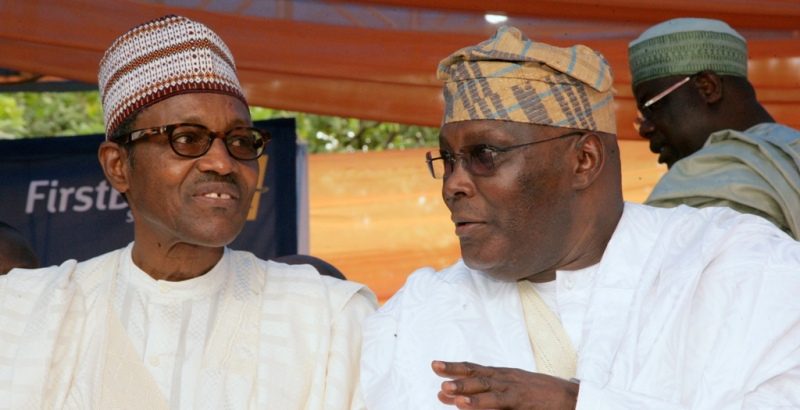 Former Vice President of Nigeria and leading presidential hopeful of the Peoples Democratic Party, Atiku Abubakar, has emerged winner of a series of polls conducted by loyalists of President Muhammadu, with the latest being a six-day Twitter poll by perhaps the most popular Buhari supporter on social media, Japheth Omojuwa.
A number of pro-Buhari influencers and supporters had following the third anniversary of the administration on May 29 initiated polls ostensibly to test the popularity of President Buhari.
However, Abubakar trounced Buhari in the earlier polls conducted by Mark Essien via @markessien and Y! Online via @YNaija.
The same fate befell Buhari as Abubakar defeated the President in the two polls conducted simultaneously by Omojuwa.
In the first poll, Abubakar garnered 35 per cent of the votes compared to Buhari’s 32 per cent.
Fela Durotoye and Omoyele Sowore, the two other contestants, scored 21 per cent and 12 per cent respectively.
In the second poll, Abubakar secured 39 per cent of the votes, while Buhari came second with 34 per cent.
The other two aspirants, Prof. Kingsley Moghalu and Rabiu Musa Kwankwaso, scored 18 per cent and 9 per cent respectively.
In both polls, respondents were asked: “Who would you vote for President if elections were held today?”
Of the total combined votes of 81,065, Abubakar secured 29,672, representing a cumulative percentage of 36.6 per cent compared to Buhari’s 26,590, representing 32.8 per cent.
But when results of the polls by the pro-Buhari loyalists are aggregated, it gives Abubakar a 9 per cent lead over Buhari, with the PDP presidential hopeful securing 41 per cent of the 106,000 votes as opposed to Buhari’s 32 per cent.
In the first online poll conducted by Mark Essien, a pro-Buhari influencer, Abubakar polled 43 per cent as against Buhari’s 35 per cent.
Blogger and online newspaper publisher, Omoyele Sowore, and former Deputy Governor of the Central Bank of Nigeria, Prof. Kingsley Moghalu, polled 7 per cent and 15 per cent respectively.
An overwhelming majority of the 9,067 respondents voted for Abubakar, giving him an 8 per cent edge over President Buhari as at the close of voting.
In the second the poll conducted by @YNaija, Nigeria’s most successful youth blog run by Red Media, who played a key role in Buhari’s media during the 2015 elections, Abubakar handed Buhari a crushing defeat of 70 per cent versus 19 per cent.
The other participants in the poll, Moghalu and Durotoye polled 6 per cent and 5 per cent respectively.
At the end of the voting of 7,444 respondents, seven out of every 10 respondents, representing about 5,210, settled for Abubakar, compared to Buhari’s vote of 1,414; Moghalu’s 446; and Durotoye’s 372.
The outcome of the four polls is a reflection of result of the latest poll by NOI/Gallup Poll, which saw President Buhari’s rating drop to 41 per cent.
In that NO1/Gallup Poll also, the administration’s three-year scorecard in the critical sectors that have the greatest impact on the lives of ordinary Nigerians, the presumed base of the president, were dismal: Economy (16%), Job Creation (15%) and Poverty Alleviation (12%).