Atiku to Sagay: You engage in beer parlour gossips instead of focusing on issues 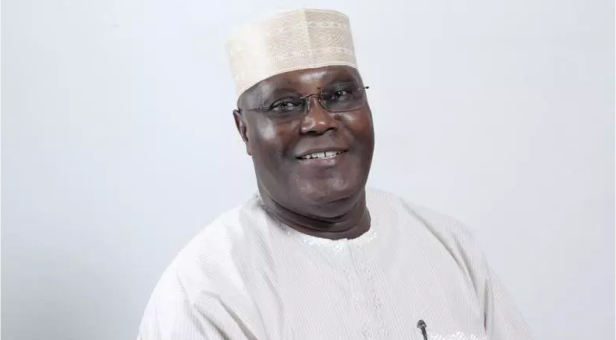 Share
Facebook Twitter LinkedIn Pinterest Email
Former Vice President Atiku Abubakar has accused the Chairman of the Presidential Advisory Committee Against Corruption, Prof. Itse Sagay, of engaging in beer parlour gossips instead of focusing on issues and policies.
Abubakar said this in response to a statement credited to Sagay that he was denied American visa because of allegations of corruption against him.
In a statement signed by the Chairman, All-Atiku Support Groups, Oladimeji Fabiyi, Abubakar said: “The attention of the All-Atiku Support Groups, umbrella body of millions of supporters of former Vice President Atiku Abubakar, has been drawn to a newspaper report credited to the Chairman, Presidential Advisory Committee Against Corruption (PACAC) Professor Itse Sagay.
“The AASG wishes to correct the erroneous impression which the purported claim by someone in the calibre of Professor Sagay must have painted in the minds of the unsuspecting public and innocent Nigerians, most of whom are lovers of the former Vice President of Nigeria and Waziri Adamawa, Atiku Abubakar.
“It is indeed sad and in bad taste that Itse Sagay, a learned Professor of Law for that matter, and someone who by his calling, training and experience is expected to know better and sufficiently informed is the one who made such mischievous statement alluding to, and implying the idea that refusal to grant a request for an entry visa by the United States of America which was based on “Administrative” procedure, is a prerequisite and precondition for qualification to becoming the President of a sovereign nation like Nigeria.
“We hold strongly that it is the prerogative of the United States of America or any other country for that matter, its embassies, diplomatic missions and consulates to grant entry visa to whoever it pleases, but also hold that denial of same for whatever reason as they may deem fit does not qualify anyone of criminal complicity. Several Nigerians have been denied in the past, and many more will still be denied, but Nigerian citizens so denied are not criminals. Waziri Atiku Abubakar is no exception.
“The United States of America has never at any time accused nor alluded to any legal or criminal infraction against Waziri Atiku Abubakar and one would have thought it answers to intelligence, common sense and the calling of Professor Sagay to speak to facts of law in this regard and not corner street discussions, beer parlour gossips, rumours and hearsays.
“Atiku Abubakar has been out of government since 2007; and that is about eleven years ago; as a businessman and a successful one at that, he has travelled to several countries all over the world including the United Kingdom, and many of these countries signed extradition pact with the United States of America, and he has not been declared wanted in any.
“We observed that Professor Sagay has been so eager to retain his job with the present administration and nothing would be considered too odious for him to please his employer and paymaster even if such puts his integrity at stake and push him to the lowest level of esteem. It beats every imagination that Professor Sagay has constantly overreached his core mandate in advisory capacity to Mr. President and has become another vocal tool in the propaganda machine of the APC.
“However, we at All-Atiku Support Groups and indeed all men and women of goodwill have a different view about how political battles should be fought and won. We are of the view that our democracy, having gone through the crucibles of trials and errors should have matured to a level where issues, policies and programmes are the plank upon which public discourse should rest. We think persons in his status should be above petty and mischievous hearsays and beer-parlour gossips, a new vocation that Professor Sagay has suddenly graduated himself into.
“Nigerians are, more than ever before, interested in robust discussions bothering on policies and programmes of the current administration and the APC led Federal government. They want to know how the policies and programmes have impacted positively on their lives and improve their living conditions and not deliberate ploys of the handlers of President Muhammadu Buhari to stifle dissenting voices and members of the opposition. Sadly, our democracy is the greatest victim of the self-righteous war which is being directed at hounding free citizens but sparring members of the exclusive club of APC and Aso Rock cabals.
“We therefore call on President Muhammadu Buhari to rein in and call Professor Sagay to order on his not-too-responsible statements which are capable of hurting our hard won democracy.”
All-Atiku Support Groups Atiku Abubakar Oladimeji Fabiyi President Muhammadu Buhari Prof. Itse Sagay
Share. Facebook Twitter Pinterest LinkedIn Tumblr Email