The presidential candidate of the Peoples Democratic Party for the 2019 election, Atiku Abubakar, has promised to complete all abandoned federal projects in Kogi State, if elected in the coming election.
Abubakar made the promise on Monday in Lokoja while addressing a crowd of party supporters at a rally.
He also promised to create jobs and wealth for the unemployed youths.
He said his decision to contest the presidency was focused on ordinary citizens, and described Kogi as a beacon of hope and progress which must be carefully managed.
According to him, the state is endowed with abundant natural resources in commercial quantity waiting to be tapped to make Nigeria a truly industrialised nation.
The PDP candidate gave the assurance to workers and pensioners in the state to ensure prompt payment of their salaries and pensions from May 29.
Abubakar also condemned the detention of Senator Dino Melaye by the police and called for his immediate release.
Ealier, the Director-General of Atiku Abubakar Campaign Organisation and President of the Senate, Dr. Abubakar Bukola Saraki, urged Nigerians to vote out the All Progressives Congress in the next general elections.
Saraki said Nigerians were not born to suffer, adding that Abubakar as an experienced businessman would create jobs for Nigerians.
“Don’t be deceived, don’t be intimidated, don’t be afraid, stand for the truth and come out en masse to vote for our candidates in all the elections,” Saraki said.
Others speakers included former Governors Ibrahim Idris, Idris Wada and State Chairman of the PDP, Sam Uhuotu, who all urged the people to vote for the party’s candidates.
Both Idris and Wada decried the state of things in the state and urged the people to rise to the challenge by voting out the APC.
Others who spoke at the event were Kola Ologbondiyan, the National Publicity Secretary of the PDP; a former Deputy Governor, Patrick Adaba; and former Minister of Police Affairs, Brigadier General David Jemibewon. 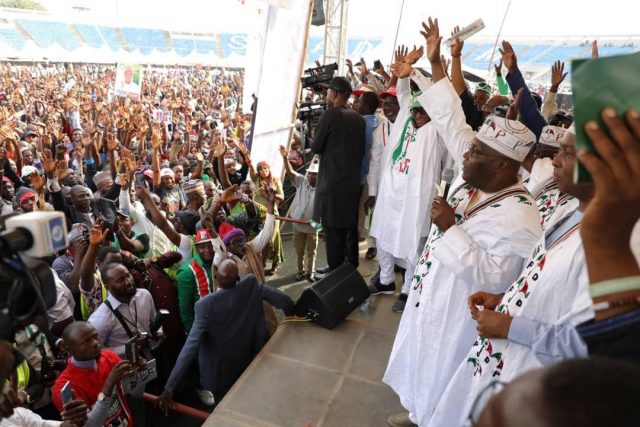 13 family members, one other killed as gunmen attack Kogi village