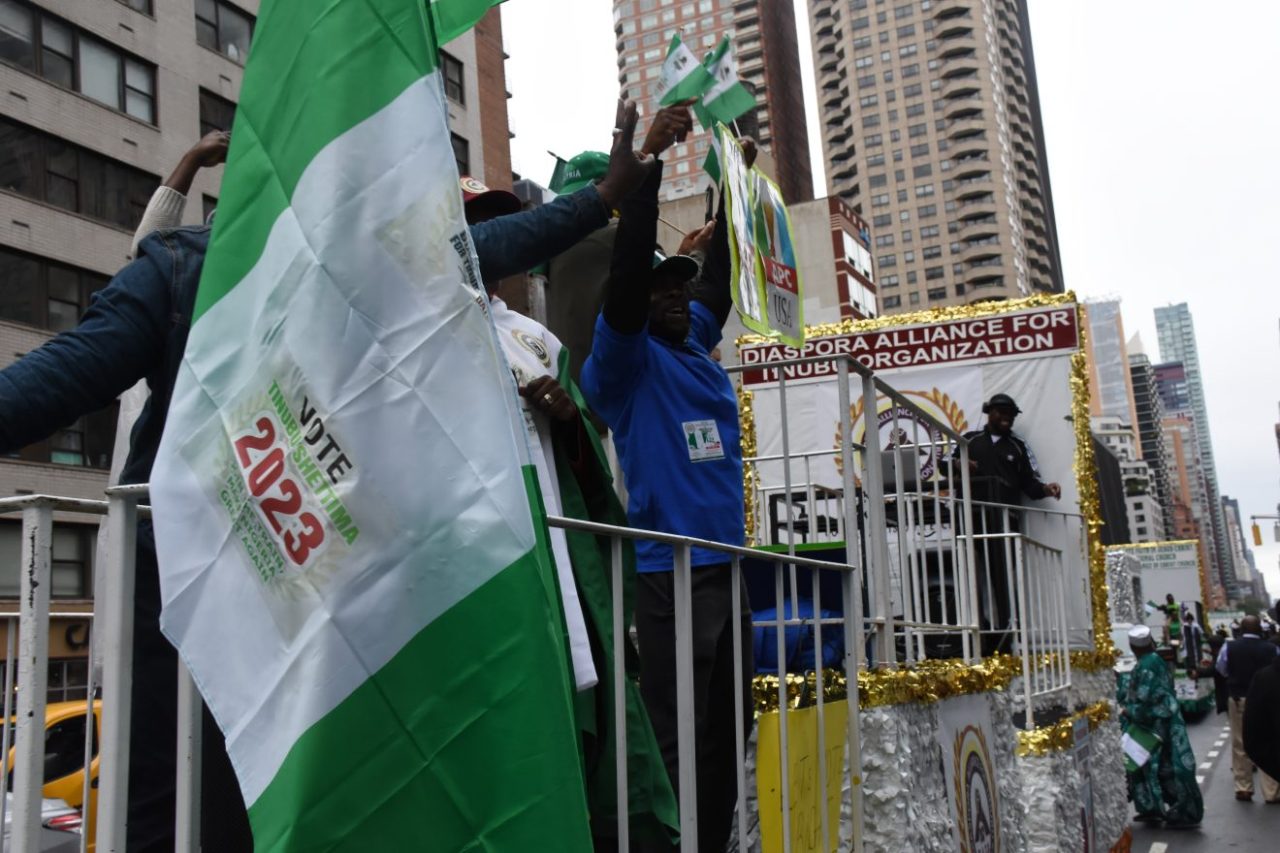 The Correspondent of the News Agency of Nigeria reports that the support groups for Abubakar, Obi and Tinubu converged on New York at the Nigeria Independence Day Parade and Carnival to canvass votes for their candidates.

Abubakar is the presidential candidate of the Peoples Democratic Party (PDP) while Obi is that of the Labour Party (LP) and Tinubu, the All Progressives Congress (APC).

The support groups for the leading presidential candidates joined the Nigeria Independence Day Parade and Carnival in a float, with DJs and supporters dancing to the candidates’ campaign lyrics.

They later regrouped at the Dag Hammarksjold Park where they continued singing and dancing to attract Nigerians to their candidates.

Speaking with NAN, the Coordinator of Save Nigeria Group for Obi/Datti, Stephen Osemwegie, said Nigerians in the diaspora wanted a Nigeria that works for everyone, bemoaning the economic situation in the country.

“When people call us from home, the calls are no longer ‘how are you’. The calls are ‘please help me, save me’. So we in the diaspora are trying to get involved and being engaged,” he said.

“We found Obi to be a competent leader with integrity. He does say ‘go and verify’ and we verified his claims and they are largely true.

“Except maybe he may miss one number or the other but if you go through his antecedents, he is really a good man.

“And in Nigeria, we don’t have this type of people coming out very often. So we see this as a one in a lifetime opportunity.

“That’s why we came out in full force to let people know that this ‘Obidient’ movement is not just a Nigeria thing,” he said.

He also said that many Nigerians in the diaspora would vote adding, “because I will be in Nigeria for the election, I’m that determined. Many of us are going to buy our tickets”.

“One of the things Save for Nigeria Group is doing is to ask Nigerians, ‘instead of going for Christmas, go in January or February and vote.

“We are also asking people to support grassroot movements in Nigeria. Support them through your finances if you can. Also call your family members that call you for money.

The Chairman of the PDP in the United States, Pastor Joe Olobor, said he was rooting for Atiku because he was the most experienced and prepared among the frontrunners for the election.

Olobor said: “Nigerians in the diaspora are actually influencers and that is why it is very important that we sell our candidate to them to be able to galvanise and utilise their influence over the many people they have in Nigeria.

“We in the diaspora especially in the United States send a lot of money to Nigeria to take care of our people back home. And we will not continue to do that if we have a good government to actually do the right thing.

“Of all the three candidates, Atiku is the most prepared candidate, the most experienced and the greatest unifier, both South and North. That’s what we are selling,” he said.

Also speaking with NAN, the Coordinator of the Tinubu Support Group, Lukman Ajasa, said Tinubu was the best among the presidential candidates because he had antecedents.

Ajasa said particularly, Tinubu would be able to address the security situation in the country, stabilise the economy and provide welfare for the citizens.

“My candidate is an accountable politician. He has fixed Lagos State and we can all see what Lagos is now.

“If you compare him to what the other candidates have done, they have not even done a quarter of what he (Tinubu) has done. I believe Tinubu is the best president for the country,” Ajasa said.

He, however, warned politicians against taking the Nigerian electorates for granted, saying the people can now fight back through their votes.

“The candidates need to open their ears and listen to what the people want. The electorates have heard enough and are ready to fight back.

“So as a politician, you must listen to the electorates and what they want. You must tell them how you want to fix the grassroots, particularly, the local governments.

“Fix the local governments and you have fixed Nigeria,” he said.

NAN reports that no fewer than 20 Nigerian Associations, groups and religious bodies joined the parade and carnival, including the UN Staff Recreation Council, Association of Nigerian Physicians, Akwa Ibom State Association and Christ Apostolic Church first in the Americas.