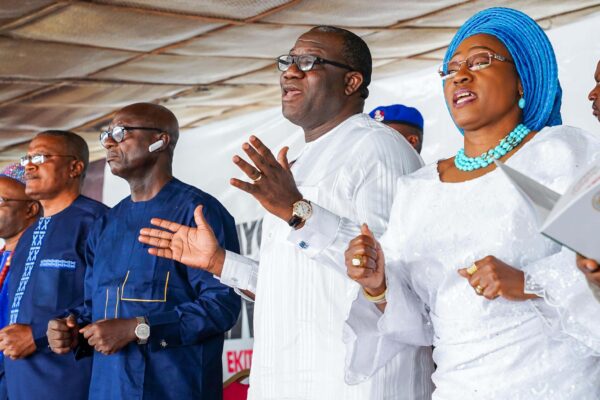 The Ekiti State Governor, Dr. Kayode Fayemi, has restated the resolve of his administration to work in a manner that would make tangible difference in the lives of the people of Ekiti State.
Speaking at the 2020 Inter-Religious Thanksgiving Service held at the Government House, Ado Ekiti, the Governor said his government was poised to implement plans aimed at ensuring rapid all-round development of the State.
Dr. Fayemi. who stressed the need for proper planning, said government’s resources are not limitless hence the decision of his administration to put in place adequate plans within available resources to enable the State witness unfettered development in 2020, which he described as the year of the deliverables.
He expressed optimism that the new year would witness the actualization of visions and miracles for the State.
He said: “Ten years ago we were talking about vision 2020, now the year 2020 itself is here. Have we achieved all that we planned for? Have we achieved all that we prayed for? Have we achieved all that we wanted when we started vision 2010? Of course, our God is a God of planning, he is not an accidental God and that is why we also must plan and put in prayers for the work that we want to do because what God says is that we should work and pray.
“God did not just say pray and pray. I know that we are ready, we are determined to work in a manner that would make tangible difference in the lives of all our people so that we would have cause to celebrate his blessings in our midst and to demonstrate that we are indeed his children who has seen favour in the eyes of God.”
While praying God to make the year that of peaceful and prosperous, the Governor urged Ekiti people to shun any misguided utterances that can cause disaffection and division, adding: “If we have prosperity without peace, all will be naught.”
Fayemi, who read the Bible lesson for the service from John 13 vs 12-17, led everyone at the service in a thanksgiving to God.
The Deputy Speaker of the State House of Assembly, Hon. Hakeem Jamiu, read the lesson from the Holy Quran chapter 67 vs 1-12.
In his sermon, the Ekiti Regional Pastor of the Redeemed Christian Church of God, Pastor Goke Kuti, expressed optimism that Ekiti State would be great again under Fayemi, saying the State has witnessed tremendous progress under the Governor.
Kuti, who thanked God for the peace Ekiti people have enjoyed under the administration, prayed God to provide the wherewithal for Fayemi’s good plans for the State to become reality.
Also speaking, the State Missioner, Ansar-U-Deen Society of Nigeria, Sheikh Abus-Salam Babatunde, urged Ekiti people to support Fayemi to ensure the State moves forward.
The cleric, who stated that everyone will give account of their stewardship, warned against pull-him-down syndrome, adding that people can be elevated without pulling others down.