The Ekiti State Governor, Dr. Kayode Fayemi, on Sunday attributed his re-election as governor of the state for a second term to the grace of God, saying that brilliance and capacity could not have earned him the governorship seat.
Governor Fayemi disclosed this during a thanksgiving mass in commemoration of his 54th birthday at the Government House Chapel, Ado-Ekiti.
He appreciated the people of Ekiti for standing by him and the administration.
The Governor, who noted that no man can attain any lofty height except by the grace of God, said it was important to always return all the glory to God.
According to him: “If one adds another year in good health and in the service of God and country, it is not by might, neither is it by some exceptional ability that one is placed in this position to serve our people, it is purely and wholly by the grace of the Lord.
“I want to thank the people.
“It’s been a hectic three months plus in office, but the grace of God is showing in almost every aspect of our lives in Ekiti State, sanity has returned, challenges have not totally gone but we thank God who has enabled us to go this far.”
Fayemi used the opportunity to express his unreserved appreciation to the people who had been in the saddle with him since the administration started three months ago, as well as the people of the state who had shown understanding in the way God had been helping him to run the state.
Governor Fayemi took the first reading from Isaiah Chapter 6, verse 1 to 8, while his wife, Erelu Bisi Fayemi, took the second reading from 1 Cor. 15:1-11.
The Vicar-General of Catholic Diocese, Rev. Father Felix Odesanmi, in his sermon stressed the need for the governor to depend totally in God as he carry out the state function.
Odesanmi urged him not to listen to advice that will not benefit the majority of the people.
At the event were the Ekiti state Deputy Governor, Otunba Bisi Egbeyemi; Speaker of Ekiti State House of Assembly, Rt. Hon. Adeniran Alagbada; Members of Executive Council; top civil servants; party faithful; and well wishers. 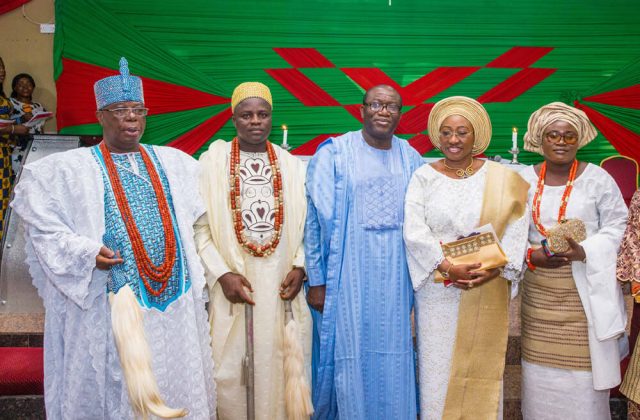 Nimi Akinkugbe: Ambassador-designate and the indigeneship question, by Reuben Abati

Mele Kyari and NNPC: One year after, by Reuben Abati