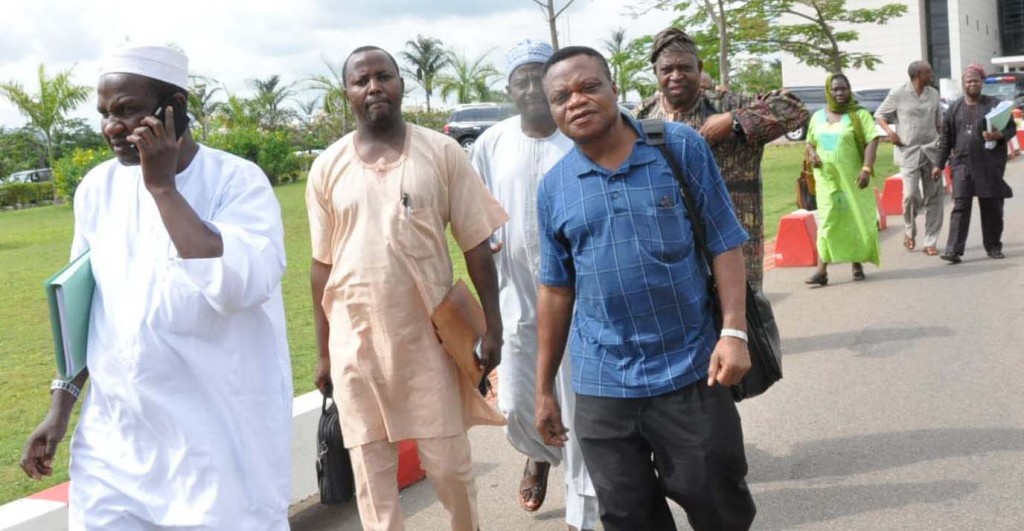 Members of the Academic Staff Union of Universities on Tuesday in Abuja walked out on the joint National Assembly Committee on Education at a meeting.
The meeting was also attended by Ministers of Education and Labour, Prof. Ruqquayatu Ruf’ai and Emeka Nwogu.
The National Assembly Joint Committee on Education had called the aggrieved unions in the nation’s higher institutions for a dialogue on the way forward in their ongoing industrial action.
The meeting was convened by the joint committee on education of the Senate and House of Representatives.
The joint committee had invited ASUU, the Academic Staff Union of Polytechnics and the Colleges of Education Academic Staff Union to a dialogue to resolve the strikes.
The ASUP strike has entered its eighth week, while the ASUU strike began on July 1.
The committee had asked ASUU to excuse it, while it interacted with ASUP and COEASU, which was viewed as a slight by ASUU.
The representatives of the ASUU left the National Assembly Complex in annoyance, saying they were slighted.
One of the members, who declined to give his name, told newsmen that they had another appointment to attend to.
Another said: “Asking us to excuse them is a slight.
“Why should they ask us to excuse them?
“What is it that they want to discuss that we cannot be part of?”
The Chairman of the Senate Committee, Senator Uche Chukwumerije (PDP-Abia), tried to defend ASUU’s actions, but members said there was no rationale for ASUU to leave.
Chukwumerije said that the committee would intensify its negotiation with the government to ensure that the issues at stake were resolved.
He said: “All we are urging is that you call an emergency meeting with 24 hours because the students are getting restive.
“We need to understand that if these students go out of hand, it will cause more problems for the country.
“Please trust us to keep to this two weeks we have given you to try and implement your demands.”
Senator Sunny Ugbuoji (PDP-Ebonyi) said it was unacceptable for ASUU to walk out on the committee as this showed a disregard for the entire parliament.
Ugbuoji said: “ASUU has walked out on us and this should be said in plain terms.
“What meeting can be more important than this meeting?”
Hon. Farouk Lawan (PDP-Kano) said that no matter what other meeting ASUU had, “it was wrong to walk out on us.
“We were trying to resolve a matter concerning the unions.”
Lawan said ASUU should have been patient and waited to hear from the members and the ministers, noting that no other meeting could be more important.
He urged the committee chairmen not to relent in rescheduling another meeting with ASUU in the interest of the students who were still at home.
He described the “snub” by the ASUU representatives as not expected of university lecturers.
Hon. Jerry Alagbaso (PDP-Imo) said ASUU’s action was unacceptable and advised that a letter be written to the union expressing the committee’s disapproval.
Alagbaso said: “It is arrogant for them to snub us knowing that this meeting is in the interest of our children.
“I suggest that a strong-worded letter be written to the union to tell them that we are not happy with their action.”
Earlier, the committee had appealed to ASUP to call off  its eight-week old strike, saying that the committee was in talks with the Federal Government on the way forward.
The committee, however, expressed optimism on the solution within two weeks.
The ASUP President, Chibuzor Asomugha, told the committee that the union would hold its National Executive Council meeting and try to do the bidding of the National Assembly.
The President of COEASU, Emmanuel Nkoro, appealed to the committee and the ministers to look into his association’s demands to avert any strike action.
Ruf’ai and Nwogu appealed to ASUP to convene a NEC meeting and call off the strike.
Both ministers gave the assurance that the Federal Government was looking into issues raised with a view to reaching an amicable resolution.