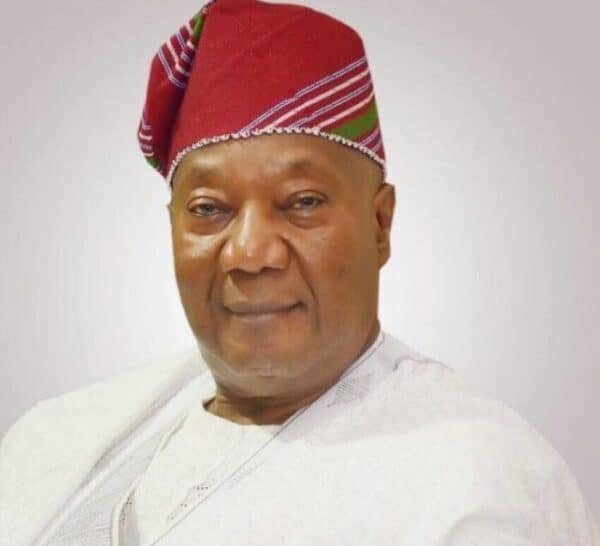 The National Leader of the All Progressives Congress, Asiwaju Bola Ahmed Tinubu, has commiserated with the Tinubu family over the death of his cousin, Alhaji Rafiu Babatunde Tinubu.
The late Tinubu, a former Head of the Lagos State Civil Service, died in the early hours of Wednesday at 75 and has since been buried according to Muslim rites.
In a condolence letter to his family, the former Lagos State Governor prayed for the repose of the soul of the departed.
Below is the full letter:

CONDOLENCE LETTER TO TINUBU OVER TRANSITION OF ALHAJI RAB TINUBU

It was with a heavy heart that I received the news of the passing away on, Wednesday, September 4, 2019, of my first cousin and eminent member of our highly-respected family, Alhaji Rafiu Babatunde Tinubu, son of Dr. Abdul Hameed Saka Tinubu. The memory of this distinguished public servant, passionate Lagosian and patriotic Nigerian popularly known simply as RAB by all and sundry will ever remain fresh in my mind particularly because of the critical role he played in helping to lay a firm foundation for the success of my administration during my two-term tenure as governor of Lagos State between 1999 and 2007.

Coming into office as governor from the private sector, I knew that I needed a Head of the State Civil Service who I could trust and who would help forge a harmonious relationship between my administration and the public service on which the success of any government depends to a significant extent. Nobody at that time could fit the bill as perfectly as Alhaji Rafiu Babatunde Tinubu. As a family member, he would understandably desire nothing but the success of my administration. But much more than that, he had the requisite intellectual grounding as well as public service managerial experience, rising from the lower rungs to the upper echelon of the Lagos State Public Service between 1978 and 1999.

With a Bachelor’s (B.A) and Master’s (M.A) degrees in Political Science from the prestigious Howard University, Washington, D.C., USA, he joined the Lagos State Public Service in June 1978 after a teaching stint at the Department of Political Science of the then University of Ife between 1974 and 1978. Before his appointment as my administration’s first Head of Service (HOS) in 1999, Alhaji Rafiu Tinubu had served with dedication and distinction in various administrative positions both in the State Civil Service and Local Government Service over a period of two decades.

His experience and dexterity in the complex politics of the public service was of tremendous value to my administration and helped to gradually build and sustain a cordial working relationship between the political class and the bureaucratic machinery of the public service. I recall that at the inception of my administration, there was a protracted labour crisis between the government and the public service as a result of the new minimum wage of N7, 500.00, which the state was unable to pay at the time due to the near insolvent state of its finances.

Alhaji Tinubu’s experience and wise counsel played a crucial role in enabling us go through that difficult period and forge a relationship of mutual trust, confidence and respect by both parties especially as the capacity of our administration to meet our welfare obligations to workers systematically grew as a result of our far-reaching reforms. His advice helped us greatly in appointing a team of highly capable, experienced and dedicated Permanent Secretaries who played indelible roles in our administration’s success in laying a solid foundation for the continuing transformation of Lagos.

At the same time, we commenced during his tenure as HOS, the reorganization, reequipping and transformation of the Lagos State Public Service to the pride of place it occupies in Nigeria’s public administration today.

Alhaji Rafiu Tinubu was particularly passionate about recruiting new, talented hands into the Service, which commenced with the employment of 5000 fresh graduates into the civil service in Y2000 popularly known as the millennium staff. It is gratifying that these have today risen to critical managerial positions in the Service.

The late Rafiu Tinubu came, saw and gave his very best to the development of the Lagos State Civil Service, Lagos State and Nigeria as a whole. I condole with his wives, his children, the extended Tinubu family, all his loved ones as well as the government and people of Lagos State on this sad loss.

I pray that his soul rest in perfect peace with his creator (Amin).