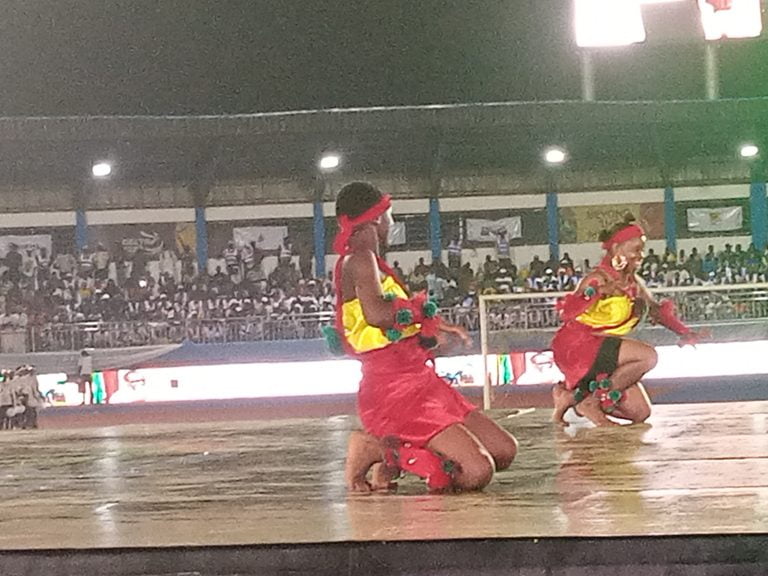 The 22,000 capacity stadium was already filled to capacity two hours before the opening ceremony on Wednesday.

The NSF was declared open by Governor Ifeanyi Okowa at 7pm.

The opening was witnessed by the Minister of Youth and Sports Development, Sunday Dare, who represented President Muhammadu Buhari, and the Chairman, House Committee on Sports, Olumide Osoba.

Top dignitaries and enthusiastic sports lovers were treated to several traditional displays and dances during the ceremony.

Dare praised the Delta State Government for making the 21st NSF a reality.

He said: “We thank the Government of Delta State for keeping the promise of hosting the festival and keeping faith in the dreams of its founding fathers.

“This great event, Sports Festival, has produced several great talents for Nigeria who have represented us at international events.

“However, this administration believes in providing enabling environment for sports to thrive.”

Okowa noted that the NSF had been a breeding ground for aspiring athletes who wanted to shoot themselves to limelight.

He said: “NSF is arguably the biggest sporting event in Nigeria and has been a breeding ground for discovering new talents for the country.

“The level of competition increases each edition and I cannot wait to see what lies ahead in the days coming.

“Obviously, records will be broken and new ones set.

“All security agencies are on the ground to ensure safety of all participants.”

Patrick Ukah, Secretary to the Delta State Government and Chairman Local Organising Committee, told NAN that the 2022 NSF had given Nigerians a consolation after missing out of the ongoing World Cup in Qatar.

Ukah said: “We have provided Nigerians another opportunity to appreciate sports after missing out of the ongoing World Cup in Qatar.

“We have a lot of interesting things during the games and one is the brand new hockey pitch, which is one of the highlights of the festival because the pitch can be ranked among top three in Africa.

“It is something to cheer about for providing such a legacy not only for the festival, but the game of hockey in Nigeria and Africa.”

The Chairman, Delta State Sports Commission, Tonobok Okowa, said that the festival would leave a lasting memory in many sports lovers for years to come.

The News Agency of Nigeria reported that highlights of the opening ceremony included callisthenic displays, match past, musical performances and ceremonial lighting of the festival torch.