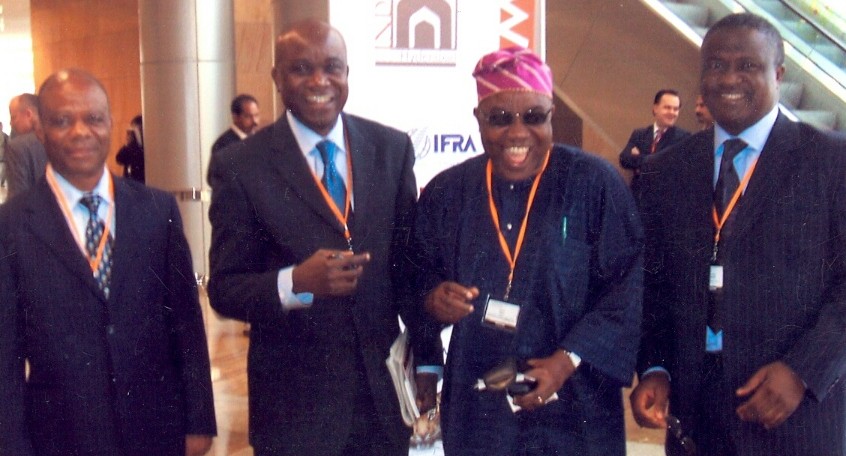 Share
Facebook Twitter LinkedIn Pinterest Email
Dimgba Igwe’s death, shocking as it were, was unexpected.  Who could have imagined that a man who woke up hale and hearty on September 6, 2014, who said his prayers and then set out for the rigours of the day’s routine, starting with a keep-fit jogging would be declared dead after being hit by a satanic and reckless driver, just like that.
To put it most ruefully, a man like Dimgba Igwe should not have suffered the misfortune of death at a time Nigeria required so much from him. Igwe, ever bubbly and full of life knew he had much to give Nigeria. For that, he must pull himself together while keeping fit every day in order to cope.
He was indeed, looking forward to another beautiful day when he took to jogging like many of us used to do. Mid way into the exercise, death came knocking in a most unexpected manner and used the impatient driver to accomplish his mission. What a manner of death!  The life of our dear friend and great colleague was cut short in a jiffy. That was the most painful aspect of the death of a friend who I respect for his talent and great intellect.
I can recall several memorable encounters I had with Dimgba Igwe. Indeed, we met at many international congresses of world Editors and Journalists. Each time, we  shared  good time and took photographs. The attached photograph was taken few years ago in Hyderabad, a city in South Central India with Dimgba, Emeka Izeze, myself and Demola Osinubi in attendance.
We were all in Joyous mood at the yearly congress of the World Association Of Newspapers Proprietors. So was the case with other numerous congresses such as International Press Institute. In each of the congresses  both Dimgba and Mike Awoyinfa were always at their best, making  profound contributions.
Of note was this year’s IPI World Congress in Cape Town, South Africa. I was wandering why the duo of Dimgba and Mike (two inseparable twins) always attend World Media congresses without their spouses. This is because people like me, Mallam Garba Shehu, Kabir Yusuf, Mohammed Haruna and of course, our BOSS Ismaila Isa were always with our wives. Interestingly, this year’s congress came with a difference. I got more astonished to discover that for the first time, the ‘twins’ came with their better halves. That happened to be the last congress for Dimgba.
In decoding the mystery in his action, I could not but continue to wonder whether Dimgba had a premonition of his death. Only the Almighty knows better.
I could vividly recall that Dimgba was full of life at the congress. We chatted, joked and spoke about their new entertainment paper. At a time, I was hungry and craving for local food. Dimgba came to the rescue, directing me to the Fish Harbour where I later had a good fill. After each of the sessions, Dimgba and Mike, armed with their micro tape recorders would comb the congress arena to conduct landmark interviews with reputable media executives who came from across the globe.
There is no doubt that we will miss Dimgba. All the same, I cannot help imagine that Mike will miss him sorely. This is the reason I felt that Mike is the man to be consoled. He was a soul mate to Dimgba, to put it mildly.
Already, our dear friend Dimgba has been getting effusive tributes from across the board. He is being celebrated by the lowly and the mighty. Dimgba wherever you are, you can see that you are larger in death.  .
Mike, though it is painful that death has done its  worst to separate you and Dimgba, but be consoled with outpouring of messages and tributes from across the world, just for your ‘twin’ brother. These go to show  that you have a friend whose name is worth more than gold. My brother, I urge you at this point to just Keep the flag flying.

Customs: A perspective on import valuation, by Timi Bomodi