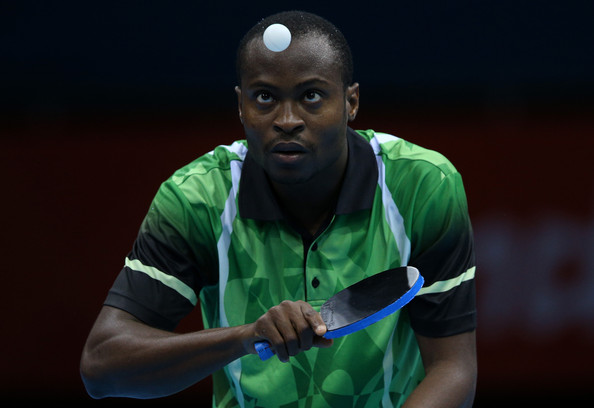 Africa’s number one table tennis player, Quadri Aruna, on Thursday vowed to make a mark at the forthcoming Rio 2016 Olympic Games in Brazil.
Aruna is among the five players, including Africa’s most decorated player, Segun Toriola, that will represent the country in table tennis at the Games.
Others are Bode Abiodun, Funke Oshonaike and Edem Offiong.
Aruna told the News Agency of Nigeria after training at the Knock-up Hall of the National Stadium, Lagos: “Well, just like every other participant going to the Games, I am aiming at making a positive impact.
“It is not my intention to attend the Games just to add to the number of participants representing the country.
“It is my desire to move several steps higher and surpass my record at my London 2012 Olympics debut.”
The 2014 International Table Tennis Federation star player said that winning a medal at the Games was feasible.
He said: “Winning a medal is very possible because I have put so much effort into achieving this.
“I have been preparing for the Olympics since the London Games.
“I played in two leagues for 10 months and I have featured in about six tournaments this year.
“I think the experience I have acquired from the leagues and tournaments can spring surprises in Brazil.”
The professional player said preparation was an important and pivotal aspect of athletes’ career.
Aruna said: “To perform well, an athlete needs to train adequately with the best equipment involved in his or her field.
“The training I am talking about is a continuous one and not a few days or weeks to the tournament.
“Also, how you feel during the tournament is very important.
“I will ensure that my morale is high and my mind free from other things except the Games.
“Sometimes you prepare well and when the tournament starts, you don’t feel good or you lose confidence in yourself.
“I pray to have full presence of self, feel super good and above all be in my best form ever when the Games start.”
The Portugal-based player added that he would not allow the country’s preparation to affect his performance.
He said: “Bad preparation is not going to be on my mind from beginning to the end of the Olympics.
“If I put that on my mind, it will affect my performance.”
NAN.