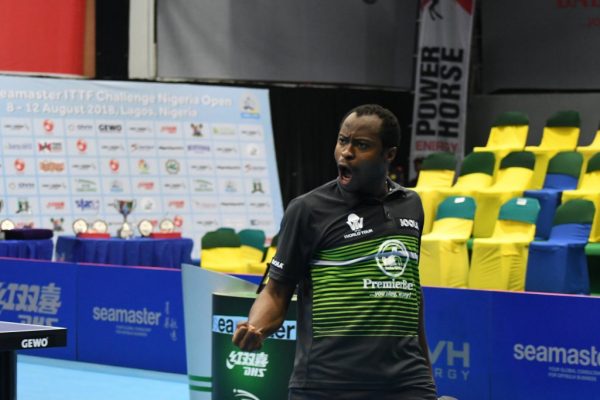 Highest-ranked African player Quadri Aruna, Olajide Omotayo and Offiong Edem on Monday all won their first games at the ongoing International Table Tennis Federation Africa Top 16 Cup in Tunis.
The three-day event, which began on Monday, is taking place at the Sports Hall of Rades, Tunis in Tunisia with 31 players participating.
Participating players – comprising of 16 male and 15 female – are grouped into four in both the male and female categories of the singles event.
Consequently, Group 1 of the female category has only three players.
The first match in male group one was an easy game for Aruna as he saw off Adam Hmam of Tunisia 3-0 (11-5, 14-12, 11-4).
He is now looking forward to a match against Algeria’s Sami Kherouf in the same group.
The world number 18-ranked player will complete his group appearance when he faces Oba Kizito Oba of Cote d’Ivoire.
Young sensation Omotayo came up strong after an early scare in his first game against Gedeon Kassa of the Democratic Republic of Congo in Group 3.
The Congolese took the first set 11-8, but an incredible comeback from Omotayo saw him claim victory in the last three sets to win 11-6, 11-3, 11-7.
The Nigerian will wait for his remaining group matches against Senegal’s Ibrahima Diaw and Algeria’s Larbi Bouriah to determine a possible quarter-finals berth.
In the female category, Edem dismissed Safa Saidani in a 3-1 (8-11, 11-9, 11-7,11-6) victory in her first Group 2 game.
She then eased past South African Simeen Mookrey also in a 3-1 (11-3, 8-11, 11-3, 11-7) win in her second group game.
The 33-year-old’s last group game is against Seychelles Christy Bristol.
Egyptian Assar Oman is the reigning champion in the male category.