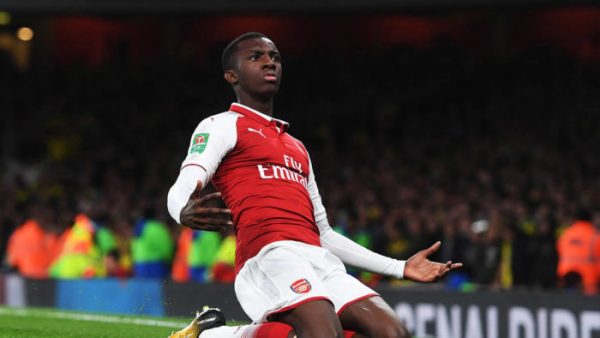 The Englishman was once again given the nod to lead the line ahead of Alexandre Lacazette and only took a few moments to get his name on the scoresheet – being presented with a tap-in after a heavy touch from Illan Meslier.

Nketiah had a brace to his name by the 10-minute mark as he produced a clinical first-time finish after some strong play on the left from Gabriel Martinelli, who was then fortunate to escape a serious injury after a red-card challenge from Luke Ayling.

Arsenal failed to take any of their numerous opportunities to score a third against the 10 men of Leeds, who grabbed a consolation through Diego Llorente but could not force an equaliser in the dying embers.

Nketiah’s hot streak continued in front of his own fans, who gave him a standing ovation as he left the field, and the 22-year-old has now become only the second Arsenal player to score twice in the opening 10 minutes of a Premier League match.

Kanu was the first to do so for Arsenal in the 2002-03 season, with the Nigerian scoring twice inside nine minutes before Patrick Vieira’s strike sealed a 3-1 win over Sunderland.

Despite Nketiah’s recent strong run of form, the striker is still set to leave when his deal expires at the end of the season, and he was quick to bat away any questions regarding his future following the full-time whistle.

“It’s a great atmosphere throughout the whole season, it’s been excellent. You really feel the connection between the players and the fans, it’s amazing to be involved,” Nketiah told Sky Sports News when asked about the possibility of signing a new contract.

“Any player just wants to be playing and get the opportunities. I’ve worked hard throughout the season to make sure that I was ready when I get my chance and credit to my team-mates for helping me play and do well. I’m just happy in the team and helping.

“We had a few chances in the first half to kill the game but we obviously didn’t take them. They are a good side, they are fighting for their lives down there and we knew that they were going to push.

“They troubled us in the second half but showed good resilience to stay with it and get the three points which is most important.”

Arsenal boss Mikel Arteta previously claimed that “good things happen to good people” after Nketiah’s brace against Chelsea, and the Spaniard has once again heaped praise on the “adored” forward.

“He’s doing what he’s done all season, whether he’s been on the bench or at home or when he’s on the pitch,” Arteta added. “This boy doesn’t change, that’s why we absolutely adore him.

“He deserves what is happening to him. He’s still got a lot to do but he has the right environment and the right personnel around him, and now he’s going to get judged for what he does when he’s on the pitch – before he didn’t have that context.”

Arsenal travel to Tottenham Hotspur for Thursday’s North London derby four points clear of their bitter rivals in fourth place – as well as being just one behind third-placed Chelsea – but Arteta is keen to instil a more ruthless mentality into his side for the crunch clash.

Victory for Arsenal on Thursday would see them seal a return to the Champions League for the first time since the 2016-17 season before they round off the campaign against Newcastle United and Everton.