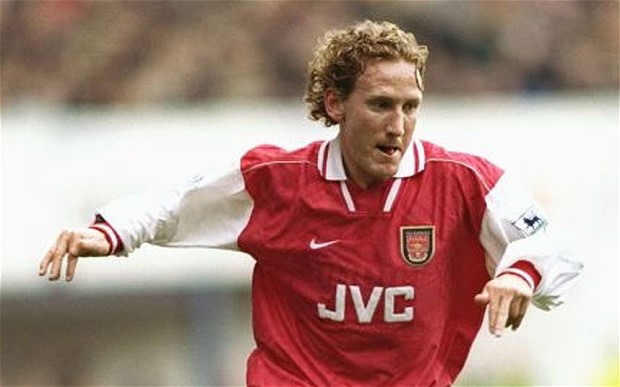 Arsenal legend and former England international, Raymond Parlour, will be visiting Nigeria on the bill of leading telecommunications operator, Airtel Nigeria as part of the Arsenal team to the launch of Airtel Premier billed to hold this weekend at the prestigious Eko Hotels and Suites, Victoria Island, Lagos.
The former Arsenal midfielder is expected to jet into the country on Sunday to participate in the activities marking the launch of Airtel Premier.
Parlour’s visit comes under the partnership between Arsenal Football Club of England and the Airtel Africa Group.
The Arsenal Legend spent 14 years in Arsenal between 1992 and 2004, during which he played 339 times, scoring 22 goals in the process for the gunners.
He also won with the London club three premier league titles, Four FA Cups, a League Cup, Three FA Community Shield, one European Cup Winners Cup.
Parlour’s best moments were in Arsenal shirts as he only got 10 caps for the England national team, the Three Lions, which he played for from 1999 to 2000.
While in the country, the ex-Arsenal midfielder will be hosted to an interactive session with a select group of Arsenal fans and members of the sports media in the country.
After leaving Arsenal in 2004, he joined Middlesbrough where he spent two and half years, playing 60 games in the process.
He signed for Hull City for 2006/2007 season.
Meanwhile, Airtel Nigeria has concluded plans to launch Airtel Premier, a prestigious product uniquely crafted to enhance success in the professional and personal lives of its highly-valued customers.
The product offers exceptional and personalized services to high Networth customers and distinguished personalities who enroll on the ‘Airtel Premier Club.’
Official unveiling of the Airtel Premier Club is scheduled to hold on Sunday at Eko Hotel & Suites, Victoria Island, Lagos, where notable Nigerians, including top-notch business people, professionals, captains from various industries and corporate high flyers, are expected to grace the occasion.