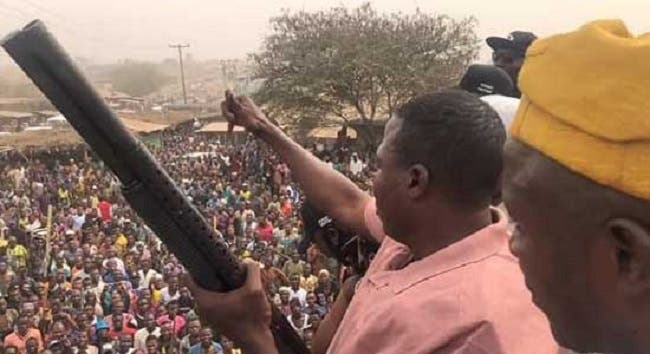 Threats by the Inspector-General of Police, Mohammed Adamu to arrest Sunday Adeyemo popularly known as Igboho over his alleged involvement in the violence that took place in Oyo State, received serious knocks from the Middle Belt Forum on Sunday.

The organisation also supported the quit notice handed by Governor Rotimi Akeredolu of Ondo State on Fulani terrorists to leave the forest reserves in the state.

The MBF specifically warned the Federal Government against any action that would escalate the ongoing tension as demonstrated by the arrest order on Igboho.

The National President of MBF, Dr Pogu Bitrus, expressed these views in a statement in Abuja.

According to him, Akeredolu’s quit order was meant for unregistered herders occupying the forests and involved in kidnappings and banditry.

He said, “We call on the Federal Government, especially the police, to desist from escalating the crisis. What the Presidency and the police ought to do now is to assist various states to flush out these criminals. Arresting Igboho at this moment can only escalate the growing tension into a raging fury that may further lead to dreadful uncertainties for our nation’s future.

“We are also worried at the turn of events in the South-West and the order issued by the Inspector-General of Police, Mohammed Adamu, for the arrest of Sunday Adeyemo aka Igboho, over his alleged role in the violence that took place at the weekend in Oyo state.

“While we welcome the bold decision by the governor to protect lives and property of citizens threatened by the activities of bandits that have now found safe havens in forests, we are completely opposed to any action by the Federal Government to escalate the ongoing tension as demonstrated by the arrest order on Igboho.”

The MBF supported Akeredolu’s quit notice, describing it as a bold decision by him to protect lives and property of citizens threatened by the activities of bandits who have found safe havens in forests.

Bitrus said, “We are completely opposed to any action by the Federal Government to escalate the ongoing tension as demonstrated by the arrest order on Igboho.

“As the umbrella organisation representing ethnic nationalities in the Middle Belt region, the MBF is in total support of ridding Ondo State of bandits and criminal elements as contained in the ultimatum handed down on criminal herders by the governor.

“As the Chief Security Officer of Ondo State, Governor Akeredolu is rightly entitled to protect citizens that are now under constant siege by criminal elements. For those who insist that the quit order on criminal herders amounts to infringing the citizenship rights of Fulani, the MBF wishes to reiterate that Akeredolu’s quit order is to unregistered herders occupying the forests and involved in kidnappings and banditry.

“The MBF wishes to state that it is unacceptable for the Federal Government to interfere in the genuine efforts deployed by Governor Akeredolu to end the ceaseless abductions of peaceful citizens for ransom. We find it inscrutable for the President Muhammadu Buhari-led Administration to insist on defending criminals whose major preoccupation is unleashing violence and terror on peaceful communities.

“What the Federal Government should do now is to assist Akeredolu and other state governors to flush out these criminals and end the culture of lawlessness ripping across not only Ondo but also other states where these outlaws have turned our nation’s forest reserves into safe harbours for their crimes.

“The MBF recalls that in the height of grisly killings and devastations that trailed many communities in Benue State, President Buhari had called on the people to return home and learn to live with their neighbours in peace. When neighbours decide to turn themselves into agents of terror on their fellow neighbours who are peace-loving, then, such neighbours are no longer neighbours but outlaws that must be arrested and be made to face the law.

“The MBF wishes to state that the only way to end these vicious assaults by these bandits is to completely flush them out of our nation’s forest reserves. We cannot continue to play the ostrich as Nigerian communities continue to suffer bloodshed due to increasing waves of vicious and unprovoked attacks on defenceless citizens by these vicious brigands.

“With many states, especially in the Middle Belt Region, now under the menace of these outlaws, we call for both the Federal Government and the states to adopt the policy of ranching as means of ending the security challenges posed by these criminal herders.

“We call on state governors to emulate Akeredolu’s quit order in order to cleanse Nigeria’s forest reserves of vicious brigands. In this modern age noted for global best practices, the adoption of the policy of ranching has become an urgent and irrevocable option.

“We stand in solidarity with Governor Akeredolu on his resolve to rid the forest reserves of bandits engaged in kidnappings and other crimes. We call on the Federal Government and other state governors to work in partnership and end the terror perpetrated by these bandits whose occupation of the country’s forest reserves have become present and future dangers to Nigeria as a nation.”