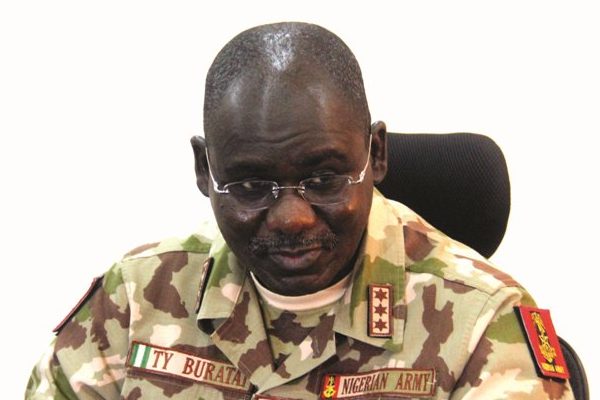 The Chief of Army Staff, Lt.-Gen Tukur Buratai, has inaugurated a cenotaph at Gudumbali, Guzamala Local Government Area of Borno in memory of troops, who died in the course of battle.
Buratai said that the town was one of the strongholds of Boko Haram terrorists in Borno North during the heat of the insurgency.
He also admitted that the army suffered heavy casualty and loss of equipment in the battle to liberate the town in 2015.
Gudumbali is about 125kms to Maiduguri, the state capital, but 15kms to neighbouring Niger Republic.
The News Agency of Nigeria reports that Buratai inaugurated the memorial arcade shortly after he flagged-off sanitation to clean up the town as part of activities to mark the 2018 Nigerian Army Day Celebration.
He said: “It was very difficult from 2014, in fact from 2013, 2014, it was difficult to come into Gudumbali from the eastern axis, it was very difficult, Gudumbali was heavily mined and fortified.
“Several attempts were made by 134 Battalion to enter here but it was not successful.
“Similarly, when the unit 157 attempted to move in for the first time, they had to withdraw. So many mines or IEDs were laid along the road to this place.
“At last, when the final directive was given, they were able to muster and successfully entered Gudumbali and crossed over and then habour here.
“It was at this point after habouring late in the night that the Boko Haram terrorists came and surprised them – troops, and the rest is history.
“We lost quite a number of soldiers and quite a number of equipment.’’
He, however, explained that the major cause of the loss of personnel and equipment was as a result of the “heat on the logistics vehicle that further ignited the fuel, ammunition and other items that set the whole camp into confusion’’.
Buratai added: “It was not all that a defeat but it was an incident that happened as a result of attack by the Boko Haram terrorists.’’
According to him, we will continue to pray for the souls of the departed both here and other places; may their gentle souls rest in perfect peace.
Buratai said: “This cenotaph will remain in our memories so that it will be a symbol, so anyone that comes here will associate himself and pray for the repose of the souls of the fallen heroes in this operation.
“We do not want to forget them.
“They will have their names inscribed here on the monument, each and every one of them that paid the supreme price here will be remembered.
“With time, the cenotaph will become a national monument for everybody to remember that the Nigerian army is an institution that is the pride of the nation and fallen victim of the insecurity that bedevil this part of the country. They paid the supreme price.’’
He promised that the families of the fallen heroes would be taken care of and not forgotten.
Earlier, while flagging-off the sanitation, Buratai described Gudumbali as a historical town well known for its economic activities, peace and tranquility but was disrupted by the activities of the Boko Haram terrorists.
He said: “We chose this place as a symbolic gesture to further consolidate on our successes in the North East in our operation against the Boko Haram insurgents.
“The choice of this location to flag-off this exercise is not a coincidence but was deliberately chosen because of the strategic and economic importance of Gudumbali.
“Gudumbali was one of the strongholds of the (once) dreaded Boko Haram sect which was illegally occupied by them.
“Our gallant troops fought a fierce battle to regain this town,’’ he said, and expressed happiness that the people had returned after they fled over seven years ago.”
NAN reports that Buratai used the occasion to donate two tractors to the community to enhance their farming activities.
Maj-Gen. Abba Dikko, the Commander of the ongoing “Operation Last Hold” designed to facilitate return of displaced persons to their communities said the exercise was to clean up the town of its “bad memories.’’

Dikko said that this was necessary to enable Gudumbali to thrive again in commerce, farming, fishing, administration and to give the people a sense of belonging.
On June 14, the chief of army staff, represented by Maj.-Gen. David Ahmadu, the Chief of Training and Operations, visited the town to perform “Sharan gona’’ – set fire to bush.
It was to signal the commencement of the 2018 bush clearing and farming activities for the people and assured them that their security was guaranteed.