The news of the killing of one Ohakwe Egegus Ikechukwu, a Captain of the Nigerian Army (NA 15045), by Boko Haram terrorists in Borno State is not true, PRNigeria’s investigation has revealed.
Ikechukwu, an indigene of Imo State, was reported by some online media to have been killed in a recent attack launched by Boko Haram insurgents in Borno State.
The trending social media reports had claimed that Ikechukwu was killed alongside an Army Colonel and three other soldiers in Borno State.
However, PRNigeria gathered that Ikechukwu and two other officers were involved in a ghastly road accident along Makurdi-Lafiya Road at Yelwata, a border town between Benue and Nasarawa States.
The officers were returning to their base after completing Cadre Conversion course at the 20 Model Battalion of the Nigeria Army in Serti, Taraba State.
It was learnt that a Honda Accord car, which the Army officers, including Captain Ikechukwu, were in, had a head-on collision with another vehicle.
The fatal crash instantly claimed Ikechukwu’s life, while Captain NA Shehu (NA14972) and Captain JE Akwaraonwu (NA 15039) survived the accident.
The corpse of the late Army Captain was immediately evacuated to the Nigerian Air Force Hospital in Makurdi, Benue State, while the other two injured officers were moved to NAF Base for urgent treatment. 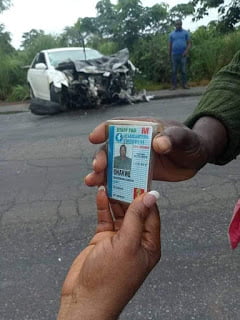 Nigeria to World Powers: Stop denying us of weapons to fight terrorism