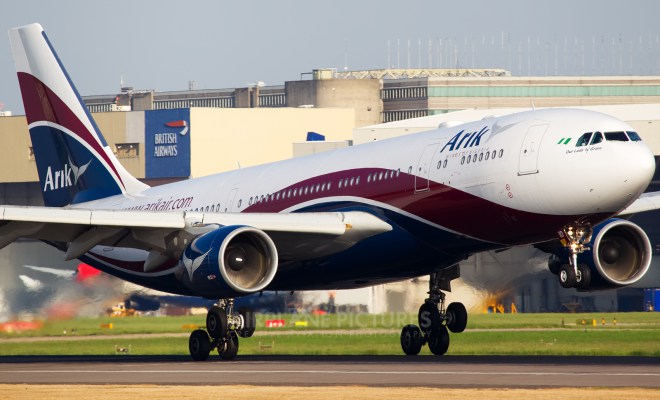 Nigerian carrier, Arik Air, has introduced a special fare for members of the Armed Forces of Nigeria.
The airline’s Communications Manager, Adebanji Ola, made the announcement on Tuesday in Ikeja.
Ola said the applicable fare starts from N20, 000 for one-way economy class ticket on any of Arik Air’s domestic routes.
He said: “The fare is applicable to all categories of serving and retired personnel of the Armed Forces of Nigeria.
“The Armed Forces covered by the scheme are Nigerian Army, Nigerian Navy and Nigerian Air Force.
“The scheme, which is part of the airline’s Corporate Social Responsibility is a way of supporting the Armed Forces of Nigeria in the discharge of their duties.”
According to him, the special fare which is available at the Airport Ticketing Offices and City Ticketing Offices of the airline nationwide.
Ola said that to benefit from the fare, passengers must present a valid military Identity card plus any other valid identity card such as: driver’s license, international passport, national ID card or permanent voter’s card at point of sale and check-in.
He said that in addition, reservation and ticketing must be made not later than 72 hours before flight.
Commenting on the development, Arik Air’s Chief Executive Officer, Capt. Roy Ilegbodu, said the airline was pleased to be of service to the officers and men of the Armed Forces of Nigeria.
He said: “We are a truly Nigerian carrier and we feel the need to support the gallant officers and men of the Armed Forces who toil day and night to defend the territorial integrity of our country and keep us safe.”