Aregbesola to Alaafin on 50th coronation: You’ve conducted yourself with grace 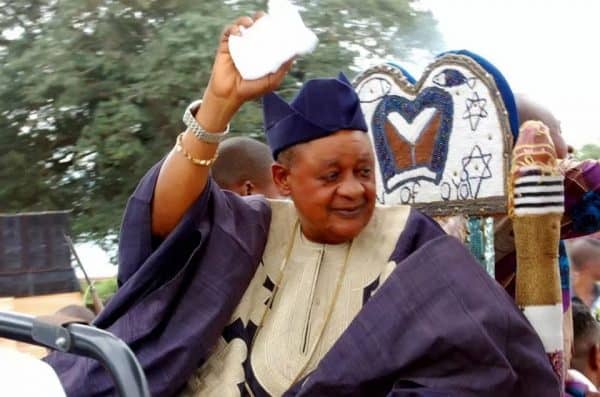 The Minister of Interior, Ogbeni Rauf Aregbesola, has described the Alaafin of Oyo, His Imperial Majesty, Lamidi Adeyemi, Iku Babayeye 111, as a foremost monarch who has conducted himself with grace, dignity and panache since his ascendancy of the throne of his forefathers 50 years ago.

The former Governor of Osun State stated this in a letter he personally addressed to the monarch to celebrate the 50 year anniversary of his coronation.

The letter was titled: “Congratulations on your 50th Anniversary.”

Aregbesola said in it: “In these last five decades, you have conducted yourself with grace, dignity and panache befitting a foremost Oba and it is beyond dispute now that you have no close compare.

“You’ve demonstrated intellectual depth, especially in the history of the Yoruba and contemporary developments around the globe in the last 200 years. You’ve displayed the valour of your forebears like Oranmiyan, Sango, Awonbioju, Adeniran and others.”

Aregbesola stated further that Oba Adeyemi has lived to the billing of the custodian of Yoruba culture and traditions and have been the most ardent promoter globally.

He said: “Your reign has also been significant to the Yoruba race in that you’ve been working towards its unity and promoting its cause nationally and globally as well. The race has witnessed great strides in science, engineering, culture, arts, education, physical and urban development. Yoruba people now occupy top positions in all walks of life in business, academia, law, government, diplomacy and others locally and abroad.

“It has been a great delight and thing of joy to me that the Almighty God has given you long life and prolong your reign and has put you in a position of leadership in all counts.

“On behalf of my wife and our other associates, I exceedingly rejoice with you on the occasion of this anniversary.

“It is my heartfelt prayer that God will continue to imbue you with strength and other endowments you will need to sustain the tempo for a long time to come.