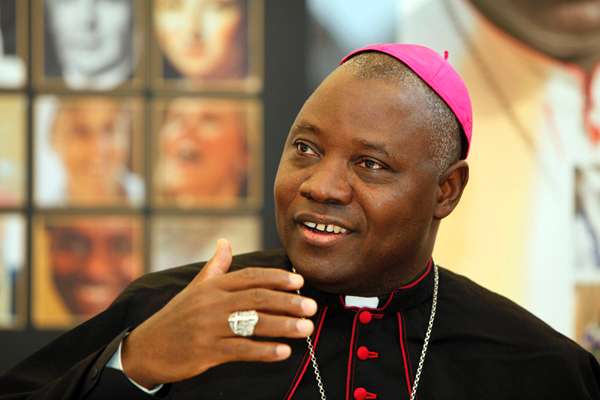 The Catholic Apostolic Administrator of Jos, Archbishop Ignatius Kaigama, has urged Governor Simon Lalong of Plateau State to ensure all-inclusive governance in order to foster peace in the state.
Kaigama made the call on Saturday in Jos at the award of the Knight of St Gregory the Great to Lalong, as directed by the Head of the Catholic Church, Pope Francis.
The News Agency of Nigeria reports that three persons, including the Governor, were given the order of St Gregory’s the Great, while five persons, including Sir Joseph Ari, Director General of the Industrial Training Fund, were given Knight of Sylvester the pope.
Speaking at the event, the Archbishop said the medal given to the governor was to spur him to adopt Christian principles and uphold the dignity of life in his discharge of duties.
Kaigama said: “Everybody should be carried along in the state, big or small, young or old, men or women, majority or minority, Catholics or other denominations and Christians, Muslims or traditional worshipers.
“Be a courageous instrument of peace and dialogue, as well as reconciliation in your leadership and service as chairman of the Northern Governors Forum.”
Kaigama explained that the order of St Gregory the Great had been awarded to diplomats, artistes, scientists, world leaders and inter-faith leaders from different human endeavours, who had shown selflessness in their service and great love for Christ and the Church.
“The Pope is saying to the governor to be guided by firm Christian values inspired by Catholic social teachings, continue to protect lives and properties and uphold the dignity of life,” he said.
He urged the governor to consolidate on the peace, ethnic and religious integration and harmony being achieved in Plateau State, and prayed for the grace of God to help him discharge his duties diligently.
Speaking on behalf of other recipients, Lalong said it was a privilege to receive papal honours, noting that it would spur them to propagate the gospel of God and be His ambassadors.
While soliciting for prayers and spiritual counsel, the governor expressed worry that some issues were often given religious colouration and sentiments in the state.
According to him, however, his administration will never allow anyone target citizens or threaten them simply because they are Christians or adherents of other faith.
Lalong appealed to Plateau people to be vigilant and prayerful, and guard communities against merchants of evil who often used religion, ethnicity and politics to exploit citizens.
He condoled with the family of Ropyil Daciya, a student who was killed by Boko Haram terrorists, and prayed for the repose of his soul and others.
The News Agency of Nigeria reports that 12 persons also received the papal medal of the Cross Pro Ecclesia et Pontifice and 12 were awarded the Benemerenti Medal.

TB Joshua was killed, I know those who did it — Ghanaian Pastor