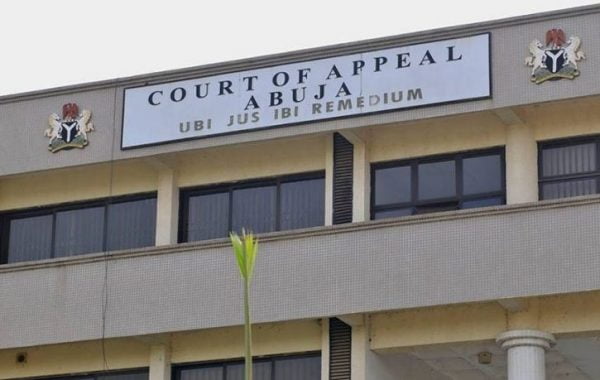 The Court of Appeal, Abuja, on Tuesday, upheld the judgment of Justice Peter Affen of a High Court of the Federal Capital Territory (FCT) in respect of land ownership dispute within the city capital.

The appellant court, in its judgment, dismissed  the suit for lacking in merit an appeal challenging Justice Affen’s judgment.

In a lead judgment, Justice Bature Gafai upheld the judgement of the trial court which had on March 14, 2011, restrained the defendants from trespassing, entering upon or interfering with or otherwise disturbing the plaintiffs’ enjoyment and possession of all the parcel of land known as Lugbe 1 Extension Layout, FCT, save as provided by law.

Other justices on the panel unanimously agreed with the lead decision.

In arriving at justice of the appeal, Justice Gafai dismissed the three issues raised by the appellants.

The argument of the appellants that the case was wrongly commenced by way of originating summons was dismissed by the appellate court.

Gafai noted that “In the entire argument of the appellants, no single references to the facts made by the respondents in their affidavits were made.

“What the appellants did was to construct their own facts and depositions and did not bother to address the issue raised by the respondents in their affidavit.

“But sadly, they did not controvert facts in the affidavit of the respondents.

“I agree with the judgment of lower court that there was no specific denial by the appellants on the issues in dispute.

“When facts are deposed in an affidavit, you can only contradict them and not to construct new facts not pleaded at the trial court,” he said.

The Court of Appeal also held that the appellants did not object to the method of commencement of the suit at the lower court, only to raise the issue at the appellate court.

“Nothing stops the appellants from applying to the lower court to set aside the suit since they felt it was wrongly commenced by way of originating summons,” the court held.

The court observed that the FCT Minister was not made a party in the suit and therefore the issue of the proper person to issue certificate of occupancy in relation to the question raised by the appellants was of no moment.

The appellate court described the question as “appellants stark irredeemable confusion that has characterised the second issue.

“It does not merit any consideration and it is hereby dismissed,” the court ordered.

Justice Affen had on March 14, 2011, also  ordered that the grant or allocation made in favour of Jonah Capital Nigeria Ltd as expressed or contained in the Letter of Grant dated 28/5/2007, the Development Lease Agreement dated 28/5/2007 and the Deed of Addendum dated 15/9/2009, is hereby  invalid, null and void to the extent that it covers, concerns, touches upon or affects all that parcel of land known as Lugbe I Extension Layout, Lugbe.

More so, the court ordered the FCDA to issue certificates of occupancy to the plaintiffs upon payment of applicable processing fees; and act upon or process the applications made by or on behalf of the plaintiffs for building plan or other approvals and matters incidental thereto in recognition of the plaintiffs’ title to the plots granted to each of them in the parcel of land comprised in Lugbe 1 Extension Layout.

“The defendants jointly and severally shall pay to the plaintiffs Five Million Naira as general damages for trespassing upon the lands comprised in Lugbe I Extension Layout, Lugbe validly allocated to the plaintiffs.”

The court also assessed the cost of the suit at N20,000.00 in favour of the plaintiffs and against the defendants.

NAN, however, reports that, not satisfied with the judgment of Justice Affen, River Plate Estate through the 2nd and 3rd defendants filed a notice of appeal dated April 13, 2011.

On March 5, 2012, the defendants filed an application for stay of execution of Justice Affen’s judgment, which was dismissed by the same court.