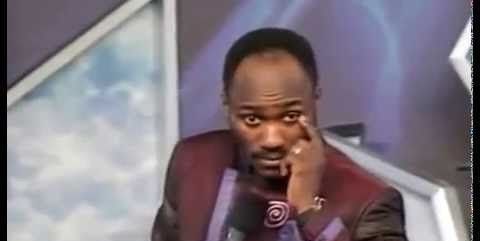 The General Overseer of Omega Fire Ministries, Apostle Johnson Suleman, has alleged that Festus Keyamo and those he described as his paymasters have concluded plans to unveil cloned video clips to justify their claim he has had an amorous relationship with his accuser, Stephanie Otobo.
Suleman equally claimed that Keyamo and “his paymasters” have also decided to kill or terribly harm Otobo in the bid to frame him or his agents as being responsible for the heinous act.
The Communications Manager to Apostle Suleman, Phrank Shaibu, in a statement in Abuja said intelligence available indicated that Keyamo and his paymasters are bent on nailing the pastor for daring to stand and speak up against the ploy by leaders of a section of the country against Christians.
The statement, released on Friday, said: “We have it on good authority that some persons have been in a hotel in Lagos where they are daily undergoing voice training and learning how to speak like Apostle Suleman. Others are also recreating scenes and editing video clips to give the impression that our Senior Pastor is involved. All in a bid to want to nail him.”
Shaibu, therefore, urged Nigerians to regard the videos when they become public as counterfeit, pointing out that the plan by Keyamo and his paymasters to silence the General Overseer and thereby annihilate Christians in the country would fail.
He said: “Is it a coincidence that the so called scandal is coming up no soon after Apostle Suleman spoke against the persecution of Christians in Kaduna? Why is a matter purportedly perpetrated since 2015 coming up now. And who is paying for the high intrigue and drama daily injected into the process?.”
The spokesman is however worried that Otobo may be killed or severely harmed as a ditch effort to implicate Suleman, giving that all other plans to nail him has failed abysmally.
He said: “That is our fear. That they would not be patient to allow the courts do their job. In fact, they have not even gone to court. They are not ready to wait for the truth to come out. We are reliably informed that they may kill her or cause severe bodily harm and turn round to say that it is our pastor that did it. We cannot put anything past them at this stage.”
Shaibu reiterated the determination of the fiery pastor to defend his name and that of the church from attack by agents of Satan, pointing out that what is happening now did not come as a surprise to the ministry.
He said: “When Archbishop Olubunmi Okogie spoke forcefully against misrule of government, the military authorities unsuccessfully tried to nail him with a woman. When Pastor Tunde Bakare could not be cowed by an unpopular administration, they also tried to do same to him. So it is consistent for the same evil men to want to shut up Apostle Suleiman as a critical voice of reason against the persecution of Christians in a section of the country.”