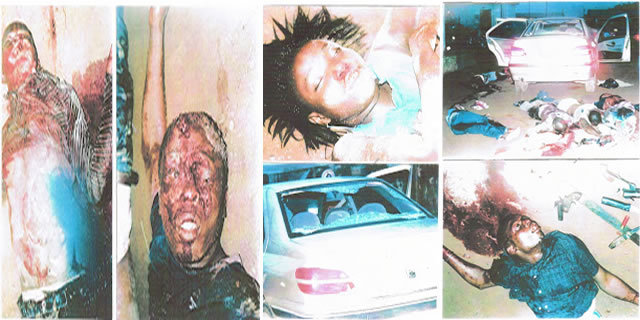 The five policemen accused of extrajudicial killings of six Apo traders in 2005 in Abuja, will on Monday know their fate as Justice Ishaq Bello of the FCT High Court will deliver judgment.
The News Agency of Nigeria reports that Danjuma Ibrahim, Othman Abdulsalami (now at large), Nicholas Zakaria, Ezekiel Acheneje, Baba Emmanuel and Sadiq Salami were alleged to have murdered the victims.
The office of the Attorney-General of the Federation is accusing the police officers of killing Ifeanyi Ozo, Chinedu Meniru, Isaac Ekene, Paulinus Ogbonna, Anthony Nwokike and Augustina Arebun.
The deceased, aged between 21 years and 25 years, were returning from a night party in 2005 when they were allegedly killed.
The defendants had pleaded not guilty to the allegations, making the trial to go through full stretch of adjudication from 2005 to date.
The date was June 7, 2005 when the popular “Apo Six” unaware of the terrible fate that lay ahead set out for a night of fun and merry making.
The nation woke up to the horrific news of their deaths at the hands of the police who claimed the five men and one woman gunned down were armed robbers who opened fire first.
The case, which came to be known as “Apo Six”, captured the attention of the public for a long time.
Following the deaths and the subsequent public outcry, an official panel of inquiry was set up by former President Olusegun Obasanjo.
Five officers accused of the killings and eight other police witnesses eventually testified that the senior officer involved, Ibrahim, allegedly ordered the killings.
The report of the panel held that the victims were at a nightclub located at Gimbiya Street, Area 11 in Abuja on the night of the incident.
The panel further had it on its record that the face-off between Ibrahim and the group allegedly started when the female victim (Augustina) turned down the senior police officer’s love advances at the club.
The testimonies of the witnesses that formed part of the panel’s report also said that Ibrahim’s pride and ego was bruised by late Augustina’s refusal to accept his love proposal and, therefore, set out for revenge.
The report also said Ibrahim had allegedly gone to a police checkpoint at the end of the street and told officers on duty that they were a group of armed robbers in the area.
According to the report, which forms the bulk of the evidence in court, when the six young people came in their car, Ibrahim allegedly drove into them, blocking their way and ordered the police officers to shoot.
Four of the six died on the spot, while Ifeanyi and Augustina had survived the initial onslaught.
The report had it that Ifeanyi had called his friends after surviving the burst of gunfire, but that was the last they were to hear from him.
NAN reports that police officers had testified at the criminal trial that Ifeanyi and Augustina were taken to a piece of rough ground outside town where they were executed.
The officers had allegedly planted guns on the bodies of all six of the bodies and pictures were taken of them by a police photographer.
NAN reports that the photographer who took the pictures was later to raise an alarm and release the pictures.
In a curious twist, Anthony Edem, one of the officers close to the case, was poisoned after deciding to confess.
An autopsy report from the National Hospital, Abuja confirmed he died of poisoning, which also formed part of the numerous exhibits before the court.
NAN.