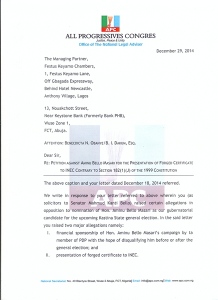 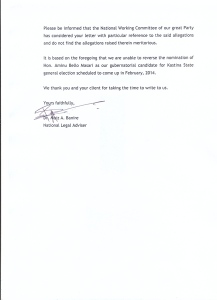 The All Progressives Congress has given the green light to former Speaker of the House of Representatives, Alhaji Aminu Masari, to go ahead with his gubernatorial campaign in Katsina State after dismissing a petition against him by Lagos lawyer, Festus Keyamo.
Keyamo had in a petition to the party’s national headquarters alleged among others that Masari had presented a forged certificate to the Independent National Electoral Commission.
Keyamo had written the petition as the solicitor to Senator Mahmud Kanti Bello, one of the gubernatorial aspirants who lost the primaries to Masari.
But the APC in its reply to Keyamo, said: “Please be informed that the National Working Committee of our great party has considered your letter with particular reference to the said allegations and do not find the allegations raised therein meritorious.”
The APC’s reply was signed by Dr. Muiz A.Banire, the party’s National Legal Adviser.
Attached is the reply of the party.