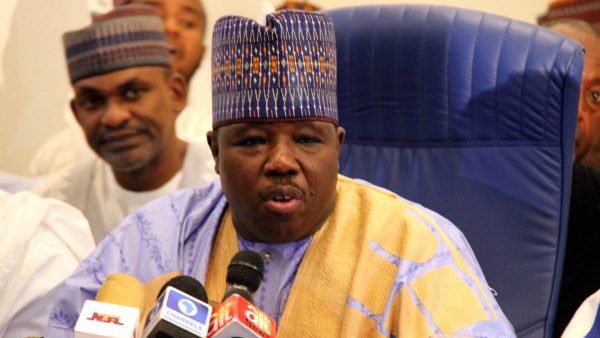 Alhaji Ali Dolori, Chairman All Progressives Congress, Borno chapter has described alleged defection of former factional chairman of the Peoples Democratic Party, Senator Ali Modu Sheriff to the APC as a rumour.
He said said this in a statement on Thursday in Abuja, while reacting to the development.
Dolori said: “I want to assure you that the news remains a rumour, because somebody is only trying to fly a kite that is capable of causing dangerous confusion during the state congress.
“We are aware of the well articulated plan and we are ready to defend any attempt toward destroying our party at the ward level and in any state not just Borno.
“We shall conduct our congresses peacefully without any rancour and I assure you that nobody can create any faction for our party in Borno during the congress expected to hold in less than two weeks.”
He noted that article 9.1 of the party´s 2014 amended Constitution was specific that application “for membership shall be made to and cleared by the party´s ward executives in the Local Government Area where the person was born, resides, works or originates’’.
The section the chairman added further said “online registration shall also be acceptable provided that it was cleared by the party’s National Working Committee.
Dolori said: “Where an application is refused, the applicant may as of right appeal to the Local Government Area Executive Committee of the party or to the National Secretary or National Chairman in case of online registration.
“I, therefore, don’t see any how the party´s national chairman can receive any person into the party when the constitution is clear about the process in that regard.”