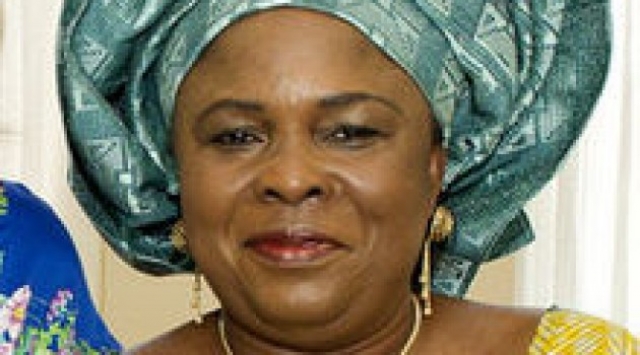 The All Progressives Congress Presidential Campaign Organisation has made a formal complaint against the First Lady, Dame Patience Jonathan, who, during a rally in Calabar, the Cross River State capital, last week called on the Peoples Democratic Party supporters to “stone” anyone who came to the state asking for change.
The letter of complaint signed by the Rivers State Governor and Director General of the APCPCO, Rt. Hon. Rotimi Amaechi, will on March 9 be dispatched to the International Criminal Court, the Inspector General of Police and the National Human Rights Commission, among others.
According to Amaechi: “Change, as the entire country must know by now, is the slogan of the APC – the rallying cry of a political party that wishes to bring hope of greater and better things to come for Nigeria and Nigerians. By her statement, Mrs. Jonathan was clearly calling on PDP supporters in Calabar to attack supporters and campaigners of the APC in the state.”
The APCPCO likened some of Dame Jonathan’s inciting statements and conduct “during this political campaign season to those of Simone Gbagbo, wife of the former president of Cote D’Ivoire, Laurent Gbagbo, prior to that country’s 2010 election.
The ICC indicted Mrs. Gbagbo for her part in planning to perpetrate brutal attacks – including murder, rape, and sexual violence – on her husband’s political opponents in the wake of the 2010 election.
The petition to the ICC and other said: “Mrs. Jonathan does not occupy any formal office in the Nigerian government, as the position of First Lady is not recognised by the Nigerian constitution. But Mrs. Gbagbo’s case shows the ICC’s awareness of how someone beyond formal governmental and military hierarchies can be identified as responsible for serious international crimes.”
The APCPCO pointed out that Mrs. Jonathan’s incontrovertible hate speech not only contravenes the laws of the land, but also goes completely against the Abuja Peace Accord jointly signed by the two presidential candidates, General Muhammadu Buhari and President Goodluck Jonathan, a gesture which is aimed at forestalling violence before, during and after the 2015 elections.
“PDP supporters in the state, who may not know better, could easily yield themselves to the First Lady’s admonition and embark on a process of wanton stoning and other attacks against APC members,” Amaechi said.
The APCPCO also called on the Nigeria Police Force to put in place emergency measures to protect the life and property of APC members in Calabar and the whole of Cross River State.