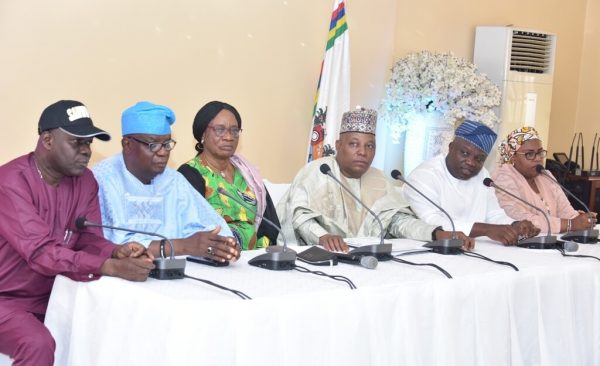 The Lagos State Governor, Akinwunmi Ambode, and his Borno State counterpart, Alhaji Kashim Shettima, on Wednesday continued their reconciliatory efforts to pacify aggrieved members of the All Progressives Congress in the South West over the outcome of the recent party primaries, with a call on aspirants from Lagos and Ogun States to unite and work for the party’s victory at all levels during the 2019 elections.
Ambode and Shettima, who had earlier met with aggrieved aspirants in Osun, Ondo, Ekiti and Oyo States, said it was important for members of the party in the South West to accept the outcome of the primaries and the party’s supremacy in order to approach the general elections with a united front.
The two Governors, who are both members of the National Peace and Reconciliation Committee set up by the APC to pacify aggrieved party members in the South West, said those aggrieved should consider making the necessary sacrifice no matter how difficult it is, in the overall interest of the party.
Speaking at the meeting held at Lagos House, Marina, Ambode said while it was gratifying that there was no issue in Lagos largely due to the personal sacrifice made, the same could not be said of Ogun, and thereby urged concerned party members to do the needful to ensure peace.
He said: “More significantly, we can see from the reflection of those here and I can declare that we do not have any issue in Lagos State and that we are one family. But again that is not to say that there is no platform for reconciliation; we do not know whether there are some aspirants in the crowd who are aggrieved but we can say affirmatively as a party that we are one family in Lagos State.
“This is not, however, to create any prejudice to whatever is happening in Ogun State. Without the setting up of this Committee, it is very clear that things are not the same in Ogun State like we have in Lagos State and we do recognize that. That is why this Committee is more or less anxious to see whatever it is that we can use as ingredients in creating peace in Ogun State.
“Whatever happens in Ogun is a reflection of what is happening in the whole of the Southwest and we are ready to make sure that this our Committee brings everybody back into one family fold. So, we have come with open mind and even when closures have been made, the feelings and input here is what we are taking to Abuja tomorrow and also making sure that NWC (National Working Committee) get a very clear picture of how you feel and ultimately if there is a need to let the highest organ of the party intervene in a way that everything that is happening in Ogun State reflects what is happening in Lagos State, we would be very happy to do it and we are committed to making sure that every representation is taken to party headquarters for redress and whatever it is that can be done.”
While emphasising the need for the party to forge a common ground to prosecute the next year’s elections, Ambode encouraged aggrieved members to embrace genuine reconciliation, saying only such could bring about compensation at the end of the day when the party emerge victorious.
He said: “This is a peace and reconciliation session and just like the Chairman (Shettima) has said, there is no clearer example of how peace can be attained than the steps that I have taken personally to make sure that the APC family is united in Lagos and you can just imagine if we are having the same reflection of what is happening in Ogun in Lagos, it would be totally unmanageable and so it takes a lot of sacrifice and selflessness for us to attain what we want and the ultimate which is to win the 2019 elections.
“It is when we win the election that we can create a larger platform to move away from reconciliation to compensation and I think that is the message that we have come to send here. If you are able to submit yourself to the overriding interest of the party, even where reconciliation cannot actually meet your innermost feeling, there is still a platform for compensation.”
Also speaking, Shettima said the meeting in Lagos was the last for the Committee in the South West after similar meetings were held in Ekiti and Ibadan earlier in the week, adding that the recommendations and solutions gathered from the interaction with the aggrieved aspirants would be collated and sent to the National Working Committee for further actions.
He, however, reiterated his appeal to aggrieved aspirants to take a cue from Governor Ambode and forget the past and begin to galvanize support for the party to ensure total victory at the polls, assuring that everyone would be better for it at the end of the day.
Aside members of the Committee – Prof. Modupe Adelabu (former Deputy Governor of Ekiti State) and Saida Sa’ad-Bugaje, others at the meeting were APC governorship candidate in Lagos State, Babajide Sanwo-Olu; APC chairmen in Lagos and Ogun – Alhaji Tunde Balogun and Chief Derin Adebiyi; Senator Anthony Adefuye; Prince Tajudeen Olusi; Prince Biodun Ogunleye; Cardinal James Odumbaku; Hon Wasiu Eshinlokun; Chief Suraj Adekunbi; Chief Bode Mustapha and Patrick Ogunde among others.