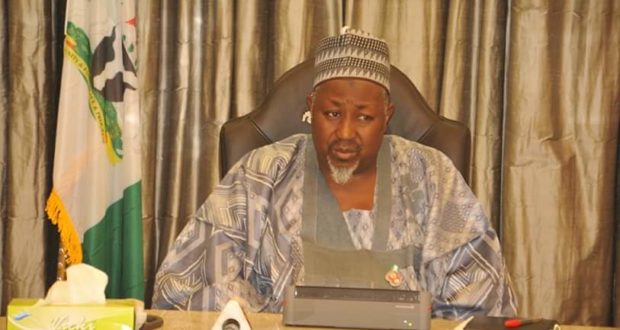 The All Progressives Congress National Convention Committee has mandated governors under the party to meet with aspirants from their states to explore the possibility of a consensus.
Governor Abubakar Badaru of Jigawa who is the Chairman of the committee, stated this at the end of a meeting with the governors on Wednesday night.
Badaru said: “What we asked is that the governors should meet with the aspirants to see if we can reduce the number of people contesting the elections by consensus.
“This is agreed in our party, but no list has been developed yet; it is not a list, it is just to reduce the number of people contesting.
“For example, there are positions that we have eight persons contesting, while some positions are unopposed and there are some positions that we have four or five persons contesting.
“There are also positions where we have two persons contesting; so we will discuss with those that have two persons contesting to see if we can have some agreement for one to come unopposed.”
Badaru, however, added that where a consensus could not be reached, the aspirants would have to go for election at the national convention on Saturday.
He affirmed that the party would come out stronger from the convention, adding that the governors were given the necessary support to make it successful and rancor free.
On aspirants disqualified from the race, he said: “I cannot say off hand, but it is somewhere around 15 or 16, I am not sure, because I do not have the total data.
He said: “But some have been screened out of the contest and most of them are for the position of youth leader, they were screened out because of age limitation.”
He however said that the APC Screening Appeal Committee was looking at petitions received against the current members of the party`s National Working Committee seeking re-election.
According to him, the report will be submitted to the general committee to look at and adopt before the national convention.
He said a feedback is expected before Friday.