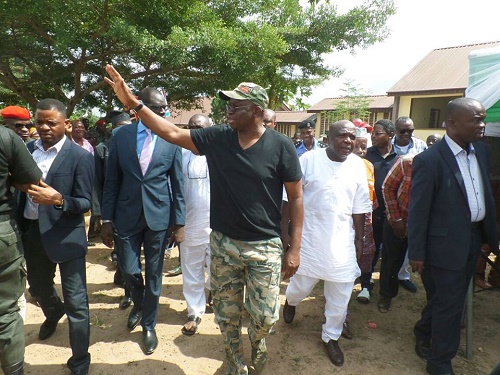 For wearing military camouflage to the House of Assembly on Tuesday to present his 2017 budget proposal, the All Progressives Congress in Ekiti State has berated Governor Ayodele Fayose for his recalcitrant behaviour.
The party said such attitude represents conduct unbecoming of Fayose’s high position in a constitutional democracy.
The party also frowned at the governor’s contempt for separation of powers as enshrined in the Constitution of the Federal Republic of Nigeria, noting that arrogating the powers of the parliament to himself is a brazen trampling on the law.
It urged the National Assembly to save the Nigerian Constitution from the governor’s executive lawlessness and recklessness.
Fayose had on Tuesday stormed the House of Assembly in a military camouflage to present budget estimate for the 2017 Appropriation.
At the occasion, he said he was the Speaker of the House of Assembly, while the substantive Speaker, Kola Oluwawole, was the acting Speaker on the seat representing him.
Reacting in a statement in Ado-Ekiti by its Publicity Secretary, Taiwo Olatunbosun, the party said Fayose’s conduct was an affront on the constitution and a brazen conduct suggesting that democracy was dead in Ekiti State.
The statement said: “We have always insisted that Fayose is a law unto himself and a threat to democracy in Nigeria, showing contempt for the law and would do anything to undermine the integrity of the supremacy of the constitution.
“As a man who has constituted himself as the law, Fayose has demonstrated several times that he has no respect for the nation’s constitutional democracy and the rule of law.
“He sacked the House of Assembly for six months and ran 19 APC members out of the town with thugs and used seven PDP members to impeach APC Speaker in the House of Assembly of 26 members after he led thugs to invade the court to beat a judge and tore court records in the Chief Judge’s office.
“Fayose keeps his own army in the Government House that he regularly unleashes on his opponents, including using same armed thugs to prevent EFCC from doing its job when the governor stormed Access Bank with thugs to shield Mrs Fani-Kayode from EFCC scrutiny on her husband’s frozen account.
“Wearing army camouflage to the parliament to present the budget has confirmed our earlier claim that Fayose has army uniforms stocked at home with which he unleashed terror on the opposition during the Presidential and National Assembly elections.”
Describing Fayose’s mode of dressing as a collective insult and embarrassment to Ekiti people, Olatunbosun said the governor’s conduct was an affront to the President and Commander-in-Chief of the Nigerian Armed Forces and officers and men of the armed forces as the only official and institution allowed to wear such uniform.
He said: “The President of the federation is allowed to wear army uniform to perform certain official functions while the officers and men of the force can also wear it, and soi by wearing army uniform to perform an official duty in the parliament, Fayose is challenging the authority of the President who is the only Head of Government allowed by law to wear army uniform.
“Fayose may be running a mercenary ring and planning something sinister as we had earlier raised alarm. It is time for the security agencies to take Fayose’s security breach seriously.
“Since Ekiti State House of Assembly members are Fayose’s captives who cannot question his illegal conduct, we wish to ask the Chief of Defence Staff and Chief of Army Staff if they granted Fayose permission to sew, keep and wear army uniform.
“We also call on the National Assembly to take parliamentary notice at Ekiti House of Assembly as a parliament that has collapsed and is irretrievably comatose and so needs intervention to save democracy and Nigerian law from those who have no respect for constitutional democracy and governance.
“Democracy is on life support in Ekiti State from the reckless desecration of the constitution of the Federal Republic of Nigeria and so it is time the very bastion of democracy, the National Assembly, came to the aid of the nation’s constitution being held by the throat by Fayose who has unabashed contempt for constitutional order.”