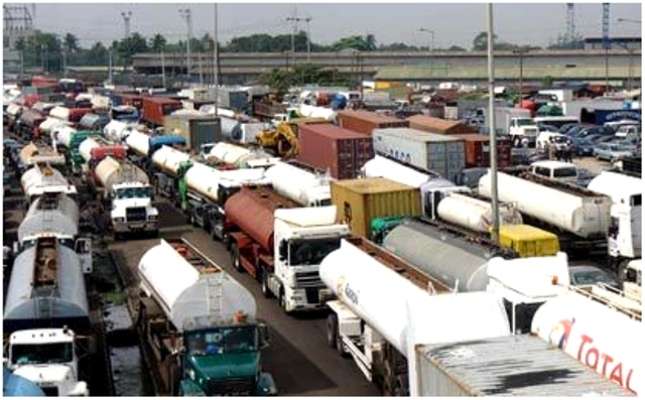 Stakeholders, including the Nigerian Military and the Lagos State Government on Wednesday gave a 48-hour ultimatum to all tanker drivers to vacate the bridge in national interest and security.
The resolution was reached during a stakeholders meeting at the Naval Base in Apapa, comprising the military, Nigerian Port Authority, LASG, Nigerian Union Petroleum Natural Gas Workers.
Others who attended the stakeholders meeting were representatives of the Nigerian Police, Dangote Group, Apapa Residents Association, Lagos State Traffic Management Authority, Apapa Government Reserved Area Residents Association, among others.
The Flag Officer Commanding, Western Naval Command of the Nigerian Navy, Rear Adm. Sylvanus Abbah, who was the convener of the meeting, appealed to the tanker drivers to leave the bridge in national interest.
According to him, terrorists might take the advantage of the traffic situation to strike in Lagos and this has to be prevented from happening.
Abbah said: “Costain is going to be the turning point of the trucks.
“After 48 hours, no truck will park on the bridge because of national interest and I hope you will all take the decision of this meeting.”
He said that some of the trucks had been parked on the bridge for weeks, adding that the bridge might collapse which would be an additional problem.
Abbah said a committee would also be set up which would involve the major stakeholders including NUPENG to further address the traffic situation.
He said: “All major stakeholders, most especially the shipping lines will be in the committee and if I have my way, the Apapa Local Government Chairman would spearhead the committee.”
The NPA Traffic Manager, Ogini Victor, who represented the Port Manager,  Aisha Ali-Ibrahim, said that the Apapa Gridlock has become a barber’s chair that is rotating and not moving anywhere.
He said: “Synergy is the keyword that can solve the problem of the gridlock.
“We have also decided that all empty containers should go to holden bays and we will make sure our men give us report on how many trucks park at the bay daily.”
The representative of NUPENG, Comrade Adekunle Adelaja, while reacting to the directive, said that the union does not support tankers parking on the bridge.
He enjoined all stakeholders to find a lasting solution to the problem as it was affecting everyone.
Adelaja said: “We need to have another meeting and call all the farm tankers. Let us see how we can be able to do the programming that trucks will just go to the depot without parking on the bridge.”
The Permanent Secretary, Ministry of Transport, Taiwo Salau, said that there should be good synergy among security agencies to resolve the traffic situation.
Salau said: “There should be synergy among security agencies so that these areas can be cleaned up and have a check point before the long bridge.”