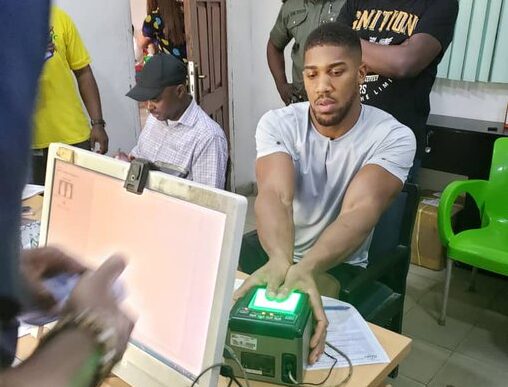 Nigerian-born heavyweight champion, Anthony Joshua, has applied for the country’s National Identification card.
The National Identity Management Commission disclosed this via its Twitter handle on Wednesday.
“Anthony Joshua enrolls for the National Identification Number and issued his NIN slip,” @nimc_ng tweeted.
Joshua’s mother Yeta is a Nigerian, while his father Robert Joshua is of Nigerian and Irish ancestry.
Joshua spent some of his early years in Nigeria as a boarding school student at Mayflower School in Ikenne.
The boxer, who currently holds the WBA (Super), IBF, WBO, and IBO titles was a bricklayer before taking up boxing full-time.
His cousin, Ben Ileyemi, is also a professional boxer.
The pair made their professional debuts together in 2013.
Joshua has also expressed interest in chess and reading books to reinforce his boxing and tactical abilities.
It can be recalled the boxer during his meeting with President Muhammadu Buhari in London in January pledged to stand up for Nigeria at anytime.
Joshua prostrated for the President at full stretch was believed to have helped him win more fans to his camp.