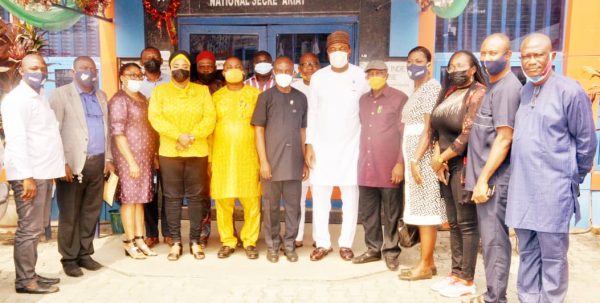 The Association of Nigerian Licensed Customs Agents has called on the Federal Government to restore sanity by checkmating multiple agencies with too many tables at the ports.

The National President of the Association, Tony Nwabunike, made the call during a courtesy visit to the association’s secretariat by the Executive members of the Nigeria Union of Journalists, Lagos State Council, led by the Chairman, Adeleye Ajayi.

Nwabunike urged government to streamline the agencies, saying that their presence had made Nigerian ports unattractive to land-locked countries.

He also expressed concern about the incursion of foreign Customs brokerage agents into clearing and forwarding business, which he said the Nigeria Customs Service should not tolerate.

According to him, safety and security remain key in the maritime industry.

The ANLCA chief also noted that the issues of arbitrary levies and charges must stop to make Nigeria ports attractive in the sub-region.

Nwabunike also advised the Federal Government to look at the area of compensation of two per cent of annual Customs duty for licensed customs agents.

The ANLCA president also laid emphasis on the need to actualise borderless trade in Africa through the African Continental Free Trade Agreement.

Nwabunike regretted that the ECOWAS Trade Liberalisation Scheme has not been effectively used by Nigerians.

He, however, noted that journalists in the maritime beat should close ranks to move the industry forward.

The ANLCA chief said the NUJ had lots of work to do in this direction.

Nwabunike also observed that some journalists in the maritime sector thrived on sensational news, saying this was unprofessional.

He promised to partner with the NUJ in the area of training for easy comprehension of maritime technologies and factual reporting.

On his part, Ajayi assured ANLCA of cordial relationship with the media.

He appealed to the association for support, particularly in the area of capacity building for its members.

Ajayi also noted key projects, including the ongoing remodelling of the union’s secretariat, which he solicited for ANLCA’s assistance for completion.

He added that training and retraining as well as welfare of members were top on the agenda of the executive.