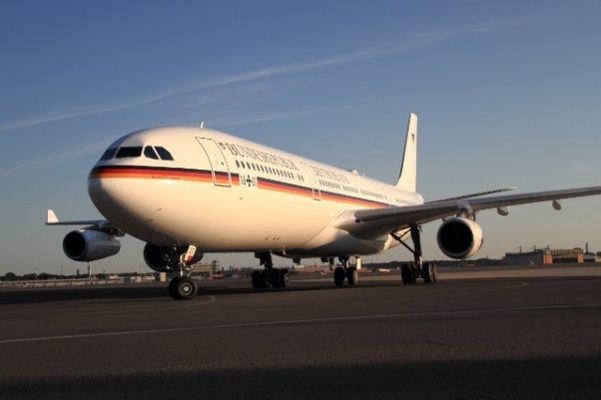 Share
Facebook Twitter LinkedIn Pinterest Email
An Airbus A340 government aircraft carrying German Chancellor Angela Merkel and her delegation to the G20 summit in Argentina was forced to land en route after suffering technical problems on Thursday evening, the captain said.
Around an hour into the trip from Berlin, the captain told passengers he had decided to land at Cologne-Bonn airport in northwestern Germany after the “malfunction of several electronic systems”, but said there had been no security risk.
It was not immediately clear when a new aircraft would arrive to continue the 15-hour flight to Argentina.
Merkel and other passengers initially remained on board the aircraft, called “Konrad Adenauer” as mechanics inspected its brakes and several fire engines waited nearby, according to a Reuters reporter on board.
Later, the delegation traveled by bus to a hotel in Bonn.
Delegation sources said efforts were underway to organize new flights for Merkel and Finance Minister Olaf Scholz, possibly on a commercial carrier.
The delay could complicate Merkel’s schedule at the two-day meeting in Argentina, where the Group of 20 industrialized countries already expect to face “very, very difficult” negotiations on myriad issues.
Merkel, who had planned bilateral meetings with the presidents of the United States, China, Russia and India, was unlikely to arrive in Buenos Aires until Friday evening, German government sources said.
Angela Merkel ArgentinA G20 summit Germany Olaf Scholz
Share. Facebook Twitter Pinterest LinkedIn Tumblr Telegram Email