When my mother will be buried – Makinde

The Oyo State Governor, Engr. Seyi Makinde, said on Tuesday that his administration has been providing a safe and secure state for investors in the state, warning criminally-minded elements to stay away from the state and the South West geopolitical zone.
The governor, who stated this while signing the Oyo State Security Network, code-named Amotekun Corps Bill 2020, into law at the Executive Council Chambers of the Governor’s 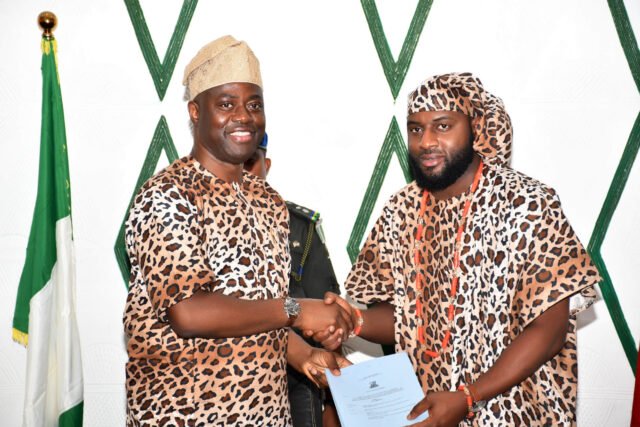 Office, Secretariat, Ibadan, declared that the Amotekun Law was a product of effective planning, strategising, engagement and alignments among the six states of the South West geopolitical zone.
He called on investors to come to Oyo State, noting that the environment was secure and safe and that his administration would guarantee high returns on their investments.
A statement signed by the Chief Press Secretary to Makinde, Taiwo Adisa, quoted the governor as saying Amotekun was not created to replace the existing federal security system.
He noted that the existing security system had gaps in terms of funding and personnel, adding that the Amotekun security outfit is meant to complement the efforts of the existing security outfits.
It would be recalled that the Oyo State House of Assembly passed the Bill into the law on March 3, 2020.
While signing the bill into law spotting the Amotekun outfit, Makinde said: “Today is 10th of March 2020 and history has just been made because Amotekun Law is in force in Oyo State.
“It has been a long and torturous journey.
“Let me also add that this is not a replacement for the traditional security agencies.
“We saw that there are existing gaps in the funding and even in the number of personnel employed but we have to secure our people.
“This is meant to complement the effort of federal security agencies.”
Governor Makinde, who reiterated the warning to criminal elements to stay away from Oyo State and indeed the South West, noted that with the state’s newly-introduced security architecture and the new Amotekun initiative, the long arm of the law would always catch up with them.
He commended the security agencies in the state for the good work they have been doing in securing lives and properties in Oyo State, noting that security remained the major duty of the government.
The governor appreciated the Oyo State House of Assembly for the promptness in the handling of the bill, noting that the speed and thoroughness they deployed underscored the importance attached to the bill.
The governor also said his administration wanted to give assurance to investors that the state is safe and secure, adding that the enabling environment for investors would be given more gravitas with the signing of the Amotekun Bill into law.
He said: “What we are saying is, let us join hands to have a secure environment.
“We want to give assurance to our investors.
“I was in Florida last week for business engagements and the responses have been great and this is one of the things I promised them at that event.
“I told them to come because we know investors’ money avoid places that are not safe – it runs away.
“So, we are providing a safe and secure business environment in Oyo State.
“Investors should please come and we guarantee decent returns on their investments.
“It is also a time to tell the criminally-minded ones to stay away from Oyo State.
“They should stay away from the South West geopolitical zone of Nigeria because if they don’t, Amotekun will get them.
“I want to also thank the security agencies for the work they are doing.
“We know they are stretched to the limit and we have challenges in the North East, but we still need to create a safe and secure environment at the state and local government levels so that our people can go about their lawful businesses.
“The concept, first meeting, and engagement on Amotekun started as far back as July 2019, and we are just signing this into law today.
“So, in reality, change doesn’t happen overnight.
“You have to plan, engage, seek alignment and finally execute.
“This is what has just happened here.
“We started with engagement with all the governors of the South West geopolitical zone of Nigeria.
“After this, we got the alignment that we have to secure our people.”
The governor used the occasion to warn opposition elements and naysayers in the state, whom he said have been criticising his government unnecessarily to have a rethink.
He stated that some critics went on air to say that he does not have a manifesto to work with, adding that it was a wrong assertion to make because he launched a 102-page document that promised accelerated development for Oyo State ahead of the 2019 election.
According to him, his government has been diligently following the promise of accelerated development since its inauguration.
Governor Makinde also stated that the development of the state was beyond quick fixes.
According to him, good governance should not be taken as 100 metre dash, but handled with effective and proper planning.
He said: “We came in with a proposal to the people of Oyo State.
“We promised them accelerated development.
“It is a 102-page document; it is still there and we are following through on those ideas we espoused in the document.
“But they want people to believe that we don’t have a clue.
“We don’t have to join issues with them because we know what we are doing.
“But I am an engineer and when you see an engineer digging in front of your house, he already has the concept of what is going to come out with from there.
“As a matter of fact, what is coming through already exists in his mind and on paper.
“Yes, they (previous administration) took Oyo State through quick fixes in eight years and that is why, within eight to nine months, some of the infrastructure they claimed they have done have fallen apart.
“So, we are carefully doing the planning and we will deliver to the people of Oyo State projects that will outlast this administration.”

When my mother will be buried – Makinde