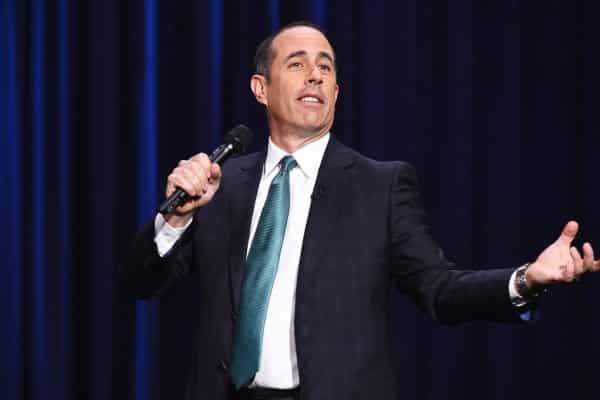 Share
Facebook Twitter LinkedIn Pinterest Email
American comedian Jerry Seinfeld has emerged world’s highest paid comedian by earning $69 million in one year.
The 63-year-old stand-up comedian and actor topped the list of 10 highest paid comedians released by Forbes Magazine on Friday.
According to Forbes, the rating is based on the Hart’s total earning between June 2016 and June 2017.
The magazine reported that a huge Netflix stand-up deal boosted Seinfeld’s bottom line to the whopping $69 million.
Seinfeld’s pal, Chris Rock, is second on the list with $57 million, followed by Louis CK, who earned $52 million.
Dave Chappelle and Amy Schumer round out the top five with $47 million and $37.5 million respectively, while Sebastian Maniscalco is at the bottom of the list earning $15 million.
Surprisingly, Kevin Hart, who was named the highest paid comedian in 2016, moved down to the sixth position with a $32.5 million earning.
Forbes noted that massive deals for TV comedy specials like $20 million per-special contracts, that Rock and Seinfeld scored, are what bolstered the incomes of most of the top comedians.
Forbes added that it created its list based on revenue from touring, television and film projects and business and endorsement deals.
It calculated the figures on the comedians’ pretax income from June 1, 2016 through June 1, 2017.
Jerry Seinfeld, known by fans as “Insurmountable King of Comedy,” has maintained the lead on the highest earners list since 2006, except in 2016 when he was displaced to second position by Kelvin Hart.
He is an actor, director and stand-up comedian “observational comedy”, often ranting about relationships and embarrassing social situations.
In 2005, Comedy Central named him as “12th Greatest Stand-up Comedian of All Time”.
Forbes Magazine Insurmountable King of Comedy Jerry Seinfield
Share. Facebook Twitter Pinterest LinkedIn Tumblr Telegram Email